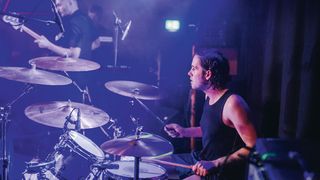 Experimental Brit rockers Role Tomassi returned earlier this year with new album Time Will Die and Love Will Bury It. Here, we chat with drummer Tom Pitts on how he added some welly to the well-received record.

How did you create your drum parts for the new album?

“Between me and Chris [Cayford, guitar], if he’s written a riff he’ll have a rough idea of what drums he wants. He’ll send me a MIDI and I’ll put it on Cubase and play around with it.

"I’ll write something ridiculously impossible, try to play it and then have to dumb it down a bit. We go back and forth. A lot of it is done on MIDI where I can get it exact and then learn it from there.”

Were there any challenges during recording?

“Some of it was more difficult than others because I normally play with a 22" kick drum and I was recording with a 24" Q Drums Copper kit. Playing on the 24" was so different because you have to put so much welly into it.

"That was quite frustrating for recording where I was getting up early in the morning, Rocky Balboa-style and trying to bust out double-kick parts on the 24". It was hard work but we wanted that massive sound, so it had to be done.

"We recorded everything in a place called The Ranch just outside Southampton with Lewis Johns who also did our last record. He’s a wizard.”

How has your playing developed since joining Rolo Tomassi?

“Before we were quite punky and every show would be different in terms of tempos and feel, based on how the crowds were; now we’re going with a new angle and aiming for precision.

"I’m going to be playing to a click now and we’ll be having samples going on, just making it bigger and tighter is the aim of the game now. We’re going to rig up a lighting system to follow the music, so Chris has been on Ableton Live writing light-scapes along to the tracks.

"It’s just to make it look better and sound better because we’ll have all the extras going on in the background, backing vocals and certain harmonies that we can’t really achieve live.”

“Initially I wasn’t because I like doing it by feel and vibing it out and seeing how it goes, but I’ve certainly come round to it.

"Once I started playing with the click I realised how much tighter everything was and I was enjoying it a lot better instead of having to think too hard about different tempos.”

Do you find any of the odd time signatures tricky?

“I grew up listening to lots and lots of prog. I’ve been in Rolo Tomassi for four, five years now but I was always a fan from the start since I was 18. It’s just my thing really. I’ve always just been the ‘prog man’.

"That’s what they called me in college. Sometimes I have to write out the phrasing, which will be just a sheet with how long the bars will be, but now it’s just stuck in my head, which is good.”