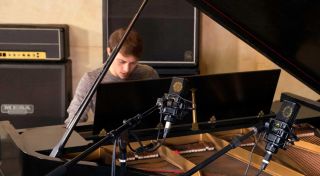 Even in the digital era, making a recording can feel like a big commitment.

Sure, you can redo it, and you’ve got plenty of processing options in your DAW, but there’s nothing worse than capturing a magical performance, only to discover that it doesn’t sound quite right. You just know that it’s not going to be the same second time around, as creative lightning rarely seems to strike twice.

However, this doesn’t have to be a problem. Lewitt’s LCT 640 TS is a unique 1-inch true condenser microphone in that it enables you to change the polar pattern even after your recording session. So, when you hit the red button, you can feel secure in the knowledge that you’re not closing the door on a different kind of sound. This means maximum flexibility, and total creative freedom.

This is all thanks to the LCT 640 TS’s Dual Output Mode, that allows you to record the microphone’s front and back diaphragm on two individual tracks.. Used in combination with Lewitt’s Polarizer plugin, this enables you to change the polar pattern at any point in the production process. The plugin works on PC and Mac and comes in VST, AU and AAX formats, making it compatible with pretty much every major DAW on the market.

Let’s say you’ve recorded something using an omni pattern but later decide that a cardioid is the way to go. With a standard microphone, you’d be stuck, but if you have the LCT 640 TS, it’s no problem. Just make the change in the plugin and you’re done, or you can experiment with other polar patterns until you find one that works.

As well as giving you new creative options, the LCT 640 TS can also be used for corrective purposes. You can fix things that you might have thought were unfixable, such as problems with the room sound and bleeding.

This isn’t the only trick that the LCT 640 TS has up its sleeve, either, as it can also function as a stereo microphone, putting each track on a separate channel in your DAW. This means that you can easily tweak the panning to adjust stereo width. And, of course, the mic works as a standard multi-pattern condenser, too: choose from omni, wide cardioid, cardioid, supercardioid and figure-8 options.

Despite its game-changing feature set, the LCT 640 TS sounds great on any source, and comes with a complementary shock mount and magnetic pop filter. These help to ensure that you can move the mic as close as you like to the recording source. Other features include clipping history, a clipping indicator and four low-cut and preattenuation settings.

Whether you’re a professional engineer or a home studio musician, the LCT 640 TS has the power to change your recording workflow. It can be used on a multitude of sources, and could quickly become your go-to microphone, not only due to its unique functionality, but its’ amazing sound.. In fact, once you’ve tried it, you might quickly come to wonder how you ever did without it.