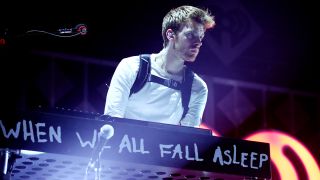 ‘The best record producers in the world right now’ is a very hard category to pin down, what defines a ‘record producer’ for instance? “Surely that’s all producers?” We hear you cry.

Well, we’ll make it easy for you. It’s the stuff that does really well in the hit parade, which is mostly pop music when you think about it. That’s not a bad thing of course, but we didn’t want to just tie it to one genre… just in case.

We have a few newcomers to this year’s list which reflects the sort of year the world of pop has been experiencing itself. Two notable newcomers to the world’s stage are Lewis Capaldi and Billie Eilish, who, let’s face it, are world’s apart. It can be said that both artists are smashing it and the same can be said for the production team behind them. And that’s who we are celebrating here.

We drew up a shortlist of the best record producers in 2019 and you have voted for your favourites and as such, we have deemed it necessary to reveal the top five from that list.

One of the year’s biggest songs in Bad Guy and Billboard 200 number one ranked album with When We All Fall Asleep, Where Do We Go? It’s no wonder that Finneas O’Connel tops the chart for the production work on his little sister’s debut album. The sound that he and Billie Eilish have created felt so fresh on the single’s release and still does.

Ronson kicked off 2019 in style by winning a slew of awards, including Academy and Grammy awards for best song with his production of Shallow, performed by Laday Gaga and Bradley Cooper in A Star Is Born. All that before the king of collaborations released his own album of “sad bangers” with the likes of Miley Cyrus, Lykke Li, and Camila Cabello.

Not wanting to take anything away from any of Atkinson’s other projects that have been released this year, but we can’t just gloss over Divinely Uninspired to a Hellish Extent. The debut album by Scottish singer-songwriter Lewis Capaldi was already being cited as album of the year on its release. Atkinson had a hand in both writing and backing vocal duties alongside producing the album.

The same can be said for Mr Holloway here, who also had a huge impact on Divinely Uninspired to a Hellish Extent in the writing and production department. In fact, both Atkinson and Holloway worked closely with Lewis on the lion’s share of the album. The album peaked at number one in the UK, Irish and Scottish charts, while the standout track Someone You Loved hit top spots in charts in over 20 charts around the world.