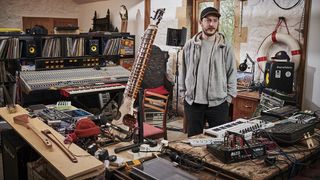 As genres go, they don't get much more diverse and convoluted than electronica. To some it's more of an umbrella term and is often bandied around alongside 'electronic music' as a catch-all phrase for anything that tends not to feature any 'live' instruments.

It is, however, where you will find some of the most experimental music slotted right next to the most easiest of listening. This is no place for people to just dump unclassifiable music, this is a place where nothing is off the table.

Check the full rundown of the 10 best electronica, ambient or underground DJ/producers in the world right now.

Ross Tones' escape to the Wiltshire countryside looks to have given the producer more space to experiment with even more instrumentation than ever, as we found out when we went to visit his studio at the end of 2018. Of course, we were there to talk about how the opening track to his third album, Loma. We weren’t expecting to see the more techno-leaning Death Of Pragmatism EP to drop last month, however.

One of the closest contests we’ve seen in this year’s reader polls saw Thom Yorke edged out of the top spot by just a couple of votes. Yorke released his second solo album this year, Anima, accompanied by a short film made by Paul Thomas Anderson. The album hit number one in the Billboard dance/electronic albums chart and has gained three nominations at the 2020 Grammys.

Kieran Hebden has been working on a new album since 2017’s New Energy, while there’s still no official release date, the London-based producer has seen fit to drip-feed us some new tracks, Dreamer and Teenage Birdsong, with the latter getting some heavy remix-time of late. There has also been a new EP, called Anna Painting, a project which was made in collaboration with painter Anna Liber Lewis.

In 2019 the Nine Inch Nails keysman returned with another solo album, which very much follows on from the previous LP, Avanti, with big luscious soundscapes, stripped-back rhythms and guitar work that wouldn’t be out of place on a NIN track. The eight-track record, Volume Massimo, is the Italian artist’s first release on Mute and has, as with any new release, seen Cortini hitting the road, playing a fair few shows around Europe.

The electronic music scene can be a curious mix of innovators, chancers and copyists, with the occasional genuine maverick. Sam Shepherd’s Floating Points most definitely falls into the mavericks camp. And this particular nonconformist has returned in 2019, with a contender for album of the year in Crush. 12 tracks of jittery synths and beats final crafted from his vintage synth and Buchla-stuffed east London studio.

FlyLo’s collaboration with David Lynch on the track, Fire Is Coming, on his latest album, Flamagra is one of those lovely wtf?! Moments of 2019. The accompanying video featuring a bunch of feral, dystopian children listening to Lynch recount a story from inside a wolf’s mouth, served both as a teaser for the album’s release and a healthy slap in the face for anybody who wasn’t listening. Flamagra features a few other collaborations with the likes of Thundercat, Anderson .Paak, Little Dragon, George Clinton and Solange.

London-based five-piece outfit, Hot Chip, released their seventh studio album at the beginning of the summer and then hit the festival circuit hard and we mean hard. At the last count we noted 27 festivals and we’ve probably missed some. The single, Hungry Child, was released at the same time as the album and featured one of our favourite music videos of recent years, despite being slightly less out there than FL's Fire Is Coming.

Paul Woodford had a simple premise for his latest album, “What if Jam & Lewis signed to Metroplex?” Turns out you get Shepperton Moon Landing, which just so happens to his third album release this year. If that’s not enough of a workrate for you Woodford has also held down jam-packed calendar of shows throughout the year, across Europe and North America.

English duo, Plaid, returned this year with the follow up to 2016’s The Digging Remedy with the 13-track Polymer LP. A microsite was created to promote the album that featured all the stems from the track, Maru. The site was created in collaboration with Cabbibo and by playing the stems, a strange jellyfish-like entity would appear and seemingly turn them off, a somewhat trippy experience altogether.

Swiss-born, Nepalese-Tibetan electronic producer Aïsha Devi followed up her 2018 album, DNA Feelings, with the S.L.F. EP, which brought together elements of "trap, trance and computer music" with lashings of drill and dreampop. Combine that with show dates that pretty much hit every continent going and you have Devi’s 2019 in a nutshell, delightfully head-spinning.