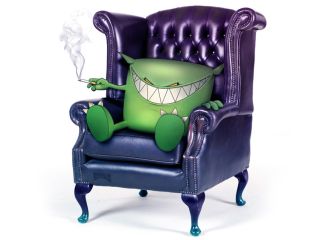 In the video above Jon Gooch (aka Feed Me) gives us an exclusive inside look at his live show and the technology and team behind it.

We caught up with him for a quick chat about the show and the future of Feed Me.

It seems like it's more and more necessary for DJs to create a show to take their careers to the next level. Was this the main motivating factor for you?

"That's a cynical outlook. Feed Me has always been a visual as well as a musical journey for me, and extending this as far as possible was and still is the main objective. I was sketching and designing the Teeth rig right from the very beginning, not knowing whether it would ever be possible to build.

"The motivation comes from trying to fully realise your vision. Anyone who's doing this for other reasons is selling themselves and their audience short. I was only willing to do it if it was genuinely without compromise, which is part of what made it such a task, but also why I've enjoyed it so much. I've been very fortunate to have such a talented team helping me too."

What are your thoughts on the 'button pushers vs DJs argument? Do you see a huge difference in the electronic live show and DJing? Where do the lines blur?

"I've been mixing my whole life, from playing records and cutting vinyl dubplates with wages from my old job, to CDs, USB, SD card, Ableton. I'm not that attached to any of it - it's the flow and structure of the set that's important, not the methods.

"That said, there's a line between editing and structuring your performance and laziness. The trick is to make sure you believe in what you're doing.

"It was important to me with the Teeth for me to be busy - it's 100% full sync. If I don't bring the next track or layers in, it stops. If I stop or slow down the track, all the lights on stage stop or slow down together with it. I've hit the wrong button before and stopped the whole thing. I have separate lighting clips I can mix over the tracks independently.

"As the discography of music and clips in the show grows, the whole rig is becoming more and more an instrument in its own right, which I love. I learn something every show, and the more tasks I can juggle on stage the more we add.

"Making the Teeth work this way has involved writing new software to allow it to happen, but shows have always involved planning and rehearsal. I don't hold it against people if they're running a pre-produced show, as long as they can justify it and be proud of it."

Has having the ability to perform your music with this show influenced the creative process in music in anyway? Do you hear a drop and think, 'this will be amazing, with these lights etc…' or are they still two completely separate processes?

"Yes actually, it would be impossible to not. It's been amazing watching how certain visuals we've programmed produce a different crowd reaction to playing the same track in a DJ set, and conceptualising the visuals is always fun. I don't see a big divide between producing music or artwork - I'm just getting ideas out. The Teeth have also let me take more time over transitions and the development of a set - it's another aspect to a story.

"Strayed a bit close to sounding like a hippy there. I need a drink."

What's next for Feed Me? Both in terms of the show and the studio?

"Little Cat Steps is my newest release; I've been starting the show with it for a while. It's kind of a pastiche of styles I love. We recorded a children's choir shouting and stamping for the reprise at the end too. It's part of my first album which I'm finishing at the moment, which has been a lot of fun.

"I want to get more involved with film and video work; we're currently working with a special effects team on building a fully animatronic Feed Me, which I'm really excited for. Upgrades for the Teeth too - there's a never ending list of things I want to add and modify, so it will grow and change over time. Hopefully it will grow into something I kind of wear like a musical Gundam suit."

To grab the new Feed Me single Little Cat Steps head over to Beatport or iTunes.