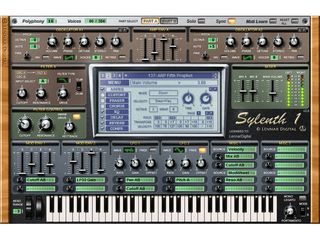 It might not have a massively high profile, but in MusicRadar's opinion, LennarDigital's Sylenth1 is one of the finest analogue-style subtractive soft synths on the market.

Up until now, only PC users have had access to its considerable charms, but with the release of version 2.0, Intel Mac users can join in the fun as well.

As well as the OS X support, this update also features a rewritten user interface and fixes problems that existed when using Sylenth1 with certain host applications (notably FL Studio and Tracktion). Other improvements include rebuilt MIDI Learn functionality and a preset browser (1024 preset are now included).

Sylenth1 2.0 is available now priced at €139 - existing registered users can upgrade for free. A demo and audio examples are available on the LennarDigital website.