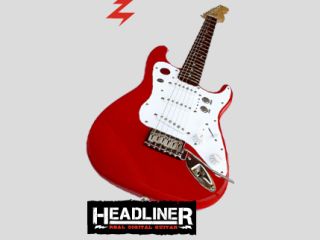 The Headliner: bridging the gap between controller and instrument.

If you're a fan of guitar video games but feel a little silly wielding a plastic axe, Zivix's forthcoming Headliner could give you the extra sense of authenticity you've been looking for.

Billed as a 'real digital guitar', this can be played as a standard electric guitar and also used as a controller for both Guitar Hero and Rock Band.

The Headliner pulls this trick by incorporating what Zivix calls 'state-of-the-art' sensors. That's about as much detail as you'll get from the company website at the moment, which states that more information will be coming soon.

Fortunately, the Minneapolis-based Star Tribune managed to speak to Zivix's president and founder Dan Sullivan, who explained that: "There is a certain group that aspires to go beyond the game. They had a taste of what it's like to be a real guitar player because that's the illusion. Why not take the next step and be able to play?"

This seems like a pretty logical standpoint from which to launch the Headliner, but the question is whether it could end up falling between a couple of stools?

At a projected price of $250, it might prove to be a little too expensive for Guitar Hero/Rock Band fans, and real guitar players may prefer to buy their hardware from a better-known manufacturer.

Zivix seems to believe that there is a market for a crossover instrument, though - time will tell if the public agrees.