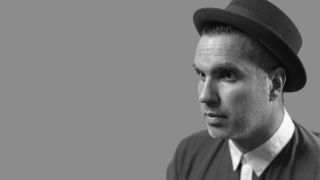 Luke Solomon is undeniably one of British house music's unsung heroes, with an impressive track record of underground success.

No one could debate Luke Solomon's dance music credentials. From setting up the seminal label Classic Recordings with Derrick Carter to taking quirky house to the UK Top 10 and international charts with his band Freaks, to DJing around the globe and performing live, Luke has been there for many of the more interesting 4/4 moments of the last decade

Luke will be hosting a session at the Machester leg of Producer Sessions Live, which take place at SSR Manchester on 28 September. This hi-tech music event is brought to you by Future Music and Computer Music and offers tutorial sessions, gear demos and essential advice for up-and-coming producers.

Ahead of the event we asked Luke Solomon to tell us about his gear, working methods, musical heroes and what he'll be focusing on during his Producer Sessions Live session.

"All mixing is done in the box of my Quad Core tower. [The Studio is] based around a full UAD set up running 2 UAD 2 cards. Tracking through Mackie 16 for outboard keyboards, drum machines etc.

"At the moment probably Maschine… but it depends on what I am doing and what need it for. Maschine is a great writing tool…"

"I love all the UAD plugs and use them all extensively. After that it would have to be sound toys for originality. I use Decapator on my master buss on all my music."

"Cubase 7. I've been with Cubase since day one. I use the time warp facility a lot… especially on remixes."

"I think it was pretty much when I shadowed an engineer in a big studio when working on my last album. I learnt loads."

What producer or artist were you trying to sound like when you first started producing?

"Prince was always a big influence on early Freaks records, as was Chez Damier, Derrick Carter, Talking Heads. I never tried to sound like them though… always be inspired by."

"Crooked Man aka DJ Parrot; making futuristic house music like no one else."

"I think, above the actual sound and dynamics and all the technical advise, the most important thing is being original and true to yourself.

"Learning the craft comes after actually developing your own signature sound. The tricks and skills are the things you need to put on top of the originality."

"Oh man, there are way too many. Pretty much any Prince or Talking Heads record, or Tom Tom Club. The entire stems from Donald Fagen's Night Fly would be cool. Bowie's Sound and Vision. And the Kindness album."

"I think it will be more about building the character of a track; using plugins to manipulate the sounds etc. And Maschine drum programming and production."