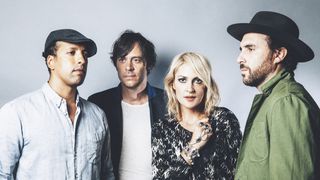 The new Metric album Pagans in Vegas is released 18 September on Metric Music.

Alternative rock band Metric are no strangers to success. Music industry plaudits have rung high and wide in their Canadian homeland for albums Fantasies (2009) and Synthetica (2012) - both honoured with prestigious Juno Awards.

However, Metric's sixth album 'Pagans in Vegas' takes a new turn. The band have always toyed with their passion for electronic pop - indeed the name 'Metric' is taken from the LED screen of a synth preset, but they've never gone full 'electro'.

Founder members Emily Haines and Jimmy Shaw explain the concept and technology behind an album they've always wanted to make.

How come Pagans in Vegas has a more electronic sound than we've heard from you guys before?

Emily: "We'd had a really intense run on Synthetica and decided to take 2014 off, full stop. So I went travelling around Nicaragua and Spain with my little guitar and Jimmy went back to his studio, which is the complete opposite - he likes the dead of winter.

"When we regrouped in LA it was like, what did you get up to? And I said, "I think I made a record" and Jimmy was, "oh, I think I did too". It was really interesting because Jimmy's stuff was very electronic and mine was more organic, but Pagans in Vegas is really us shouting out to the artists we've always loved, like Kraftwerk, Depeche Mode, Joy Division, New Order and The Cure."

I can hear a Depeche Mode influence in some of the songs, particularly the track 'Too Bad, So Sad'

Jimmy: "Oh yeah. When we were in the studio and that was the riff, we all looked at each other and went, OK, that's really close to a Depeche Mode riff, do we do it or not?

"In hip hop culture they make the references as overt and obvious as humanly possible, even to the point where they take another song and rap over it, but in rock we don't do that very much, there's always this concern about the music being individual to you, only sounding like you and nobody else is like you.

"This time, there was a real effort to just let the reference wear itself and be clear about it."

Emily: "That's what I loved about the stuff that Jimmy had written - there are all these references to the seeds that were sown by great electronic music. It worries me that there will be a whole generation who don't know who Kraftwerk is, or who came before us.

"EDM is like that movie We Are Your Friends, which just tanked; there has to be more to electronic music, more narrative. What makes music interesting is its history, passing the torch and caring about what came before."

How did that electronic element change your approach to writing and recording the album?

Jimmy: "Most of the songs were written on synthesizers and drum machines. I wrote like that before, but there would be a process of transcribing the music into live instruments, or Emily would write songs acoustically and we would change them to be more electronic.

"On Pagans in Vegas, when a song was written on a 909 with a modular synth bassline, we let it be instead of adapting it to a rock band-type thing. So in a sense it was somewhat easier to record, because we let the writing be the recording."

What hardware did you use for the electronic element of the production?

Jimmy: "The main instruments I used to write and record most of the album were from a company called Synthesizers.com. About three years ago I really started getting interested in modular synthesis, and for some reason that company kept coming back to me.

"I know that most of the modern synth culture is going the way of Eurorack, but Synthesizers.com has been around since the late 90s. It's out of a robotics company in Texas, and there's something about their modular synthesisers that I find incredibly intuitive."

Had you tried Eurorack before?

Jimmy: "I found the mixed language of Eurorack extremely confusing; there are so many different manufacturers and the language on the faceplate of every modular synth is completely different. It's like having to learn 15 languages and then write in all of them at the same time.

"With Synthesisers.com it felt so cohesive to me. I could really understand what I was trying to accomplish with a sound and go forward and get it. It was very strange because I've got loads of polysynths, like the Roland Jupiter-8, Oberheim OB-X and Yamaha CS-80, yet I'd find myself writing songs on a modular playing with two hands, which is really not conventional."

What's the best DAW in the world today?

The 50 best VST/AU plugin synths in the world today

Is there a lyrical concept behind the album?

Emily: "It's funny because Synthetica was very conceptual, I'd had that title kicking around for years before we'd even written a note, and it was very much about addressing what's real versus what's artificial, and where does technology begin and end.

"With Pagans in Vegas, I was trying to avoid saying things I'd said before. We continue to evolve and push ourselves so that the live show, which is where the music really lives, can become this ever-expanding, complex, beautiful ride that we can take you on - not a one-note emotion.

"More broadly, with the title Pagans in Vegas: we're still here, we're still human. The world's still this insane casino where it's always 4am, the lights never go out and everyone's gambling everything trying to win."

The new Metric album Pagans in Vegas is released 18 September on Metric Music.

I understand there is a cassette tape version, but wasn't aware that this technology still existed?

Emily: "I know, and this is what I love. This is one of those rare, uplifting tales from the music industry; one that none of us are used to hearing. My brother has a record store, but he almost got rid of the shop. He's had it for over 20 years but nobody was buying vinyl - or anything; it was kind of heart breaking. But he didn't get around to going bankrupt and stuck it out, and in the last five years he's seen a 200% increase in vinyl, and even more exciting, young kids are buying cassettes."

Do you have a love of that technology?

Emily: "Cassettes are a great way for new bands to make their music cheaply, get it out and not have their music be everywhere, and be basically worthless. So I really embrace that, and I was also really happy making artwork for a cassette - it was like the universe was back in order.

"We've made it so you get a download code with it for the album. And they sold like hot cakes, so the future is bright for cassettes!"

On the opposite side, what can you tell me about the more futuristic Pagan Portal app?

Emily: "Well this is the second app we've made. As we've increasingly seen, music is used more and more to sell everything to everybody until it's kind of stepped on and not treated as the main event. So we just felt we could make a quiet place where there is no advertising and create this little spot for those people who love Metric and want to know about or hear our stuff first.

"We're so pleased with it so far; you get little notifications like, "guess what, here's a song!" In fact, today we're going to unlock the whole record for our fans to hear. In the case of our app, free is actually free."

I understand you have enough material for a second album too? In what shape or form is that likely to take?

Jimmy: "It's actually the polar opposite of what we did on Pagans in Vegas. There's no synthesisers at all, it's completely organic and stems from the way Emily writes on an acoustic guitar or piano.

"It's more like a follow up to Emily's solo record, but performed by Metric. We recorded it while we were on tour across the US. On our days off we'd go into these legendary studios, like The Village in LA, and record in a way that was different for Metric, sitting in a room together with headphones on doing live takes off the floor."

Did you think about releasing a double album?

Jimmy: "The two albums are meant to be two sides of a whole, the whole representing who we are, what we are and what we're capable of doing. If it was 1978, we would have put it out as a double album, but right now trying to get people to buy two albums when they can barely buy one is a lofty ambition, so we decided to spread it out and make it a year-long experience."