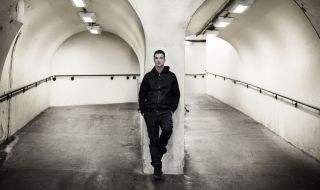 PRODUCTION EXPO 2013: Andy Barlow isn't the kind of chap who nervously reaches for a well thumbed 'producer's handbook' to guide him in the studio. When it comes to planning out musical directions for the projects he chooses to work on, he likes to be a little more confident, challenging and original than that.

With his cult outfit Lamb, he famously had a Fear of Fours. This wasn't just the title of the band's 1999 long player, but also a statement of intent and a diss at the electronic music scene's lazy reliance on 4/4 rhythms.

Proof, then, that this is one producer who is never going to be happy working within formulaic structures... That's why it's going to be so interesting to see the results of his forthcoming collaboration with ivory tinkler David Gray.

"It's David but not as you know him," says Barlow. "I'm just finishing up producing and mixing his new album, and it's sounding awesome and very different from his earlier stuff; much more experimental and unusual than you might know him for."

Besides remixing the sound of Cheshire-born singer/songwriters, Barlow has been spending his time in the studio with Bristol based band The Ramona Flowers. The five-piece, described as "An amalgamation of Sneaker Pimps and Kasabian with a sprinkling of Alt-J", caught Barlow's ear after their blistering demo made its way to his desk. Barlow loved it, and work immediately set about on a debut album.

This is where we join him now - ears ringing in a studio, sculpting out the new direction for The Ramona Flowers…

So, The Ramona Flowers. Fully formed band or putty in your hands?

"Well, they needed quite a lot of creative input at the start, but they are great players and have solid ideas. Way more often than not they had too many ideas for each track.

"I came in and simplified and consolidated, to which they responded beautifully. Sometimes I would go through the 90 or so tracks they had recorded for the song, solo each one, and say to the band, 'Who loves this… Anyone?' If no-one loved it, we would delete it and keep going until we went through all of the tracks.

"Sometimes we would only be left with a handful of ideas, which we would use as the foundation for the new version."

You're producing their debut album. What are the pros and cons of working with a band at this stage?

"The major con would have to be that it takes a lot of energy to consolidate the ideas of the band and get an identity. And on the pro side I'd have to say that it's great to help a band like this find a sound and identity. It feels good."

You hooked up with them after hearing their demo CD. We're intrigued to know what kind of raw state their songs came to you in, and then how you envisioned them ending up.

"Some tracks, especially towards the end of the project, came pretty much ready to mix and just needed a few touches and maybe another crack at the vocal. And then some others were completely disassembled and rebuilt from scratch.

"The beauty of the band was that once I gained their trust in the studio, they really were up for experimenting and not being too precious about the previous state of the tracks."

Tell us about the studio - were you based at The Distillery in Bath?

"We tracked the album at The Distillery, and then I mixed it at my studio in Brighton. The Distillery is the best studio I have ever been lucky enough to use. Pretty much every bit of gear I have ever dreamt of is in there, from vintage mics and compressors to state-of-the-art consoles and monitoring. It's also got a great vibe, and our friend Gabriel cooked us some incredible food!

"The one piece of gear there that really blew my mind was Frank Sinatra's old UA console. They've just acquired it, and it's an amazing bit of kit."

Has the project been as smooth as Ol' Blue Eyes himself, or have you run into any snags working with the band?

"Each song is different, but quite often the band would get a great sounding verse and mid section together but the chorus would let it down.

"Bizarrely, towards the end of the album, it swapped around and the band were writing a killer chorus but struggling with the verse, which is a better dilemma to be in."

You're not known for rules, but you must have at least a couple in place to keep things on track?

"My only real rule is that we get a guide vocal in early - even if it is just a hummed melody - so that we can build the track around it.

"I find with lots of constructed music that sometimes the vocal is like icing on the top of the cake, but it's much better when you build the tracks around the vocal, making the vocal the centre of the sandwich."

What other top tips do you have for getting the best out of a band?

"I'd say that you have to try as much as you can to include everyone's input. For lots of the album it was just me putting down parts and ideas, with only one or two of the band in the studio. I strongly encouraged the other members not currently working to come up with other ideas and sounds in down time. Good ideas came from that, much like a chef would have a colleague to make stocks and sauces while he beavered away with the details.

"At the start of the album my role was definitely 'whip cracker' - you have to be. I would try and do that in a firm, but kind, way."

Let's touch on sonics: how in-depth do you go when getting specific sounds?

"Each one is different. I've stopped trying to get a sound that's in my head - I find it a waste of time. However, quite often I will stumble on a mistake or other idea that would be much better than the one in my head. I generally try and remain open and let the track take its own cues.

"I think the best producers look at the dynamic, then at the band, and then the songs, and figure out what part of the jigsaw is missing. You have to become that part. I'm hands on like that, for sure, unless the track is already inevitable. In which case I just let it unfold."

What are your other strengths in the studio?

"Patience, first and foremost. Then what I bring to the table myself as an artist. I can help write parts, lyrics and arrangements. I can also score strings and I have a good pool of great musicians in case we need some fresh input.

"I'm also really fluent with computers. Ableton Live is like an extension of my body now."

Finally, the fans want to know, are there any plans for a new Lamb album?

"Yes! Me and [Lamb vocalist] Lou Rhodes are getting back in the studio to work on a new album in December. Our sixth!"