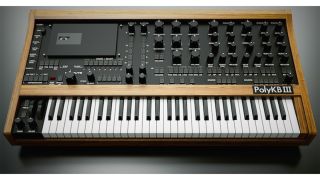 More mods than a fight-scene in Quadrophenia.

This, we're told, sets itself apart from your average analogue synth emulation with what has been dubbed a 'revolutionary' new feature: aliasing-free, continuously morphing VCOs. Users will have access to hundreds of different analogue-modelled waveforms, all via flexible, free-running (VCO1, VCO2, VCO3) oscillators.

To further expand the sonic possibilities, the three oscillators can also be controlled by all modulation sources, which are set using the Wired Mod function. The macro modulation matrix has over 35 'hardwired' options between various sources and destinations.

Another new feature in the update is the Voice XY pad, a per-voice modulator that affects each note played so that it sounds different to previous and subsequent notes. Alongside this is the Space XY pad, a dynamic stereo modulation pad, which enables the building of unique stereo scenes by providing each new note played with a distinct, polyphony-controlled position.

Lastly there's the sequencer, which gives you the ability to create four different sequences of up to 128 steps, with each sequencer line controlling up to four different synthesis parameters via the User Mod function.