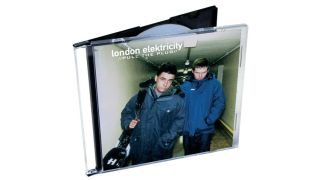 When Tony Colman and Chris Goss first heeded the drum 'n' bass call in the mid-90s, they never imagined they'd create the mighty London Elektricity, let alone one of the scene's most vital ever labels, Hospital Records. These two ex-Acid Jazz heads actually started out producing disco but, after seeing what progressions labels like Moving Shadow and Good Looking could make, they jumped ship and stayed on this new path for the next two decades.

Their debut album, Pull The Plug, set everything in motion. It fused almost Eno-esque experimentation (the title track was made of other records' final seconds) with powerful Jazz vocals (the now legendary Liane Carroll). It dipped into rolling jungle on the album closer, Dirty Dozen, but opened with sublime jazz funk stylings on the timeless, Song In The Key Of Knife. It sounded precise and deliberate. Surely calculated?

"The whole thing was totally haphazard in the way we put it together, actually," says Colman. "But we did our best to make it hang together as an album. I think there are some very strong moments on there. It certainly wears its heart on its sleeve, and it was unlike anything else that people had made at that point."

Pull The Plug did have elements of the 'chase scene' drama of artists like Peshay, the upright bass funk Reprazent made their own, and the grooves of a Bukem set, but it did truly add an edge that made it stand apart.

"We were thinking very, very differently to other producers at the time," says Colman. "We used to get lumped in with that 'coffee table' sound, which sort of annoyed me. What we were doing was much more analogue and well more gritty than a lot of people."

London Elektricity would continue to shape the landscape over the course of another five studio albums and through shepherding countless releases on Hospital Records. After the success of Pull The Plug, Chris Goss left the band to be the full-time manager of the label, but Colman continues to be the driving force of London Elektricity today. The new album, Are We There Yet?, is out now.

Here, Tony Colman takes us through his stunning debut, track by track.

Song In The Key Of Knife

"The album came out on Hospital Records in 1999. We didn't even know we were gonna make an album as London Elektricity really - we were just trying to get by as a label.

"First of all, we made a compilation called Ultrasound, and that got licensed by Sony in Japan who had opened a special division for drum 'n' bass in 1997. They offered us a full label platform over there. That's when we really thought about making an artist album.

"We'd just released this track here, Song In The Key Of Knife, which was a game-changing tune for us. You have to remember that we were also making disco at the time on our own house label, Galactic Disco. That was actually selling better than the drum 'n' bass, but we knew we had to do one or the other, so we went with the drum 'n' bass.

"Song In The Key Of Knife was a very special piece of work and, for me, was where my heart was lying at the time, so that led to us doing an album. It was cool because it had the drum 'n' bass production, as well as the live playing. Peter Shrubshall is on here doing flute and sax. He was in my old 80s jazz-funk band, Izit.

"I still think this is the best track on the album, and it has a great intro, so it made sense to open with it."

"What does P.B.E. stand for? Let me think… this was about 20 years ago [laughs]. Perfect. Beautiful. Excellent. I think. John Forté on vocals here, too. It's a long track, isn't it? The last one was over 11 minutes and this is nearly ten minutes long. In those days, there were no set structures for track lengths or arrangements in drum 'n' bass yet. For many years, the structure of drum 'n' bass would become identical on virtually every record, and it was the same for house music. You'd have your 32 to 64 bars of drums, then you'd have your breakdown intro, then the drop, the main body, then another breakdown, and then an outro main body. But in the late 90s, that structure hadn't been settled on, so you could literally just follow your muse. It was a lot more interesting, certainly. You weren't making records for DJs, you were making records for the records' sake. That made all the difference."

"At just over six minutes, this is one of the shortest tracks on the album. As I remember, Shakedown came out as a last-minute addition to Pull The Plug, actually, because we didn't have enough tracks to fill a full album [laughs]. We were scratching our heads, thinking what to use to bulk it out, and remembered that we'd made a house track called Shakedown [by Playmates on Galactic Disco, 1996] and decided that we could make some kind of drum 'n' bass version of that.

"We had the producer Landslide in the studio [aka Landmass/Tim Land, Hospital's first signing], and he got involved in this track. There's a fair bit of his work in Shakedown - he's a great producer. It was a fun three-way collaboration between Tim, Chris Goss and myself."

"The version of this on Pull The Plug is totally different to the original version of Rewind. When we were signed in Japan they said they wanted a single to take to radio and we had done this instrumental called Ultrasound, which was the title track of our first compilation. I wrote the vocal over that.

"It has [legendary UK Jazz singer] Liane Carroll on here doing the vocals. It was the first time I'd worked with her. She's amazing. Her version here is in two halves. There's the acoustic half and then it drops and goes into - what I don't think now is particularly good - drum 'n' bass.

"The intro is really strong, though. We released it as a 7-inch shortly afterwards with just the acoustic side of it on it, which is just the intro of Rewind. That half of the song is a real highlight for me, and one of the few moments on this album that has stayed with me over all the years. Again, it's all live instruments. There are acoustic guitars, Peter Shrubshall on horns. He plays a really nice bass clarinet line on here too towards the end, which is wicked.

"It all came about at the very early dawning of the internet and the content of the song was about being addicted to the internet [laughs]."

"Landslide came in on this one, too. This track was him remixing either Do You Believe or Dirty Dozen, and it just became so different that it took on its own life. We encouraged him to turn it into this strange Latin Jazz thing. It was a bit too fast for house and a bit too slow for jungle.

"This featured Liane Carroll on vocals again. She has been a solo artist for as long as I can remember. She's won every award going for 'best female jazz vocalist' in the UK. She's just had a new album out, actually, called Seaside, which was number one in one of the iTunes charts. She's massive. I tried to book her to do the album launch of my new album, Are We There Yet?, and she's booked up to 2017! She's incredibly popular now. It's been incredible to be on this journey with her for 20 years, seeing how she's turned from being almost unknown to being so big."

"This is a cover version of an amazing track by Webster Lewis. The original is about 20 minutes long and this is our, sort of, interpretation of it, again with Liane on vocals.

"I did loads of versions of the beats on this. There's a downtempo one and there's a full drum 'n' bass version one, too. I think the one that ended up on the album was half-tempo, rightly. Again, it has a full live string section on it, doing a kind of Steve Reich motif thing on it.

"Do I play anything? Yes. I've always been a songwriter. My band, Izit, actually had a top 30 single in 1988 called Stories, which was a cover [of a track by] by the rare groove band, The Chakachas. Our version became a hit because it was a great 'come down' tune at acid house parties. People like Paul Oakenfold used to play it at the end of the big warehouse parties and field raves.

"In the studio for London Elektricity, I play what most producers play - keyboards and guitar - as well as some bass and a bit of drums."

"Pull The Plug was really just a proper jazz jungle track. The main thing about it was that everything was reversed. I sort of decided to make the entire track from bits of endings of other tracks as well. So every sample is from the finale or last chord of loads of obscure library recordings and so forth - listen to the climatic drum solo ending samples I used.

"I've always been into following concepts, dogmatically, just to see what happens; it yields some unexpected results. I love Pull The Plug. It's fun to set yourself challenges like that in the studio."

"This was a B-side to another sibling-based title, Sister Stalking. We've always had fun with our titles. It's always been very important that a track should have an original title. I didn't know then that it would become even more important with Google.

"The vibe here was more of a rock vibe with the bassline, but overall Brother Ignoramus was a very loungecore track, as well. We used to jokingly refer to our music at the time as loungecore. We actually did a compilation a little while ago on Hospital called Loungecore Classics, because it's a thread that has run through a lot of our stuff, and the stuff of artists who've just signed more recently, like Nu:Tone and High Contrast. A lot of them have lounge elements in their drum 'n' bass, too."

"There's some nice strings and horns on here. We had quite a few players on the album, which made it stand out for the time. There's some great playing by Mike Kearsey on trombone here, as well as Duncan Mckay on trumpet, and not forgetting Ingrid Schellsop's violin.

"It made sense to end on Dirty Dozen as it was a real roller. I think it's the most straightforward drum 'n' bass roller on the album.

"It's probably the only tune you could easily mix into your set. Everything else was so complicated structurally, or unmixable. Dirty Dozen was a very straightforward track, on quite a complicated album. They don't make 'em like that anymore [laughs]."