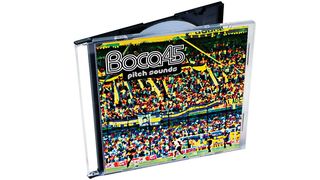 Bristol has long been a hotbed of cool beats. The fabled 'sound' has gone through many incarnations, from trip-hop to drum 'n' bass, and the list of producers hailing from the city reads like a who's who of dance music royalty. You know Smith & Mighty, Massive Attack, Reprazent and Portishead, but another name has been bubbling away alongside these legends since the early '90s: Scott Hendy.

Alumni of the Purple Penguin record shop (a sorely missed Bristol institution that served as HQ, taste-making centre and vinyl spot for the city's DJ community), Hendy manned the counter, and DJ'd out under its banner across the globe.

It wouldn't be long before he turned his hand to production, collaborating with other eager staff members, as well as local turntable legends like DJ Andy Smith and even Portishead's Geoff Barrow (who Hendy remains close friends with today). After a slew of 12-inch releases exploring the dancefloor-friendly world of b-boy breaks on much-loved labels Hombre, Illicit, and Cup of Tea Records, he adopted the moniker of Boca 45, fusing a love of football (Club Atlético Boca Juniors, no less) and 45rpm records.

Come album time, he was courted by Genuine, Catskills and, the label he went with, Grand Central. The Manchester imprint, owned by fellow vinyl-obsessives, Rae & Christian, was the perfect fit for his style. And the album format allowed him to explore his b-boy influences, as well as more song-based, psych, and chillout grooves.

To paraphrase a football commentary cliché, Pitch Sounds is an album of two halves. The 12 tracks are part DJ Shadow's Endtroducing album, with its attention to rare breaks and sampling, and part the more song-based beat arrangements of Morcheeba, The Nextmen and Grand Central head honchos, Rae & Christian.

Here, Scott talks us track by track through his classic long player.

"The title of Pitch Sounds comes from the pitch on a turntable, a football pitch, and a nod to Pet Sounds, which is an album I loved as well. I wanted to work that in.

"I also worked the tracks on the album into the order they would come in a football match, so The Countdown is just before the kick off.

"This track was heavily influenced by DJ Shadow's introduction from his Endtroducing album as well. I loved that record. This was my nod to that.

"It also has Monkey Moo, from [Bristol Rap legends] Aspects, on beatbox and vocals."

"This has Stephanie McKay from the Brooklyn Funk Essentials singing on it. Geoff Barrow had a hand in her debut album and asked me to put some demos forward for it, because he knew the way I was writing stuff. I co-wrote a disco track on that album. She liked it and said she'd like to work with me again if I ever made an album of my own.

"This was recorded in J and J Studios, which is owned by Jim Barr, the bass player in Portishead. This track is completely live. We had various players come in on this. I think it was because Grand Central saw that as a potential radio track, and maybe didn't want to have too many samples.

"We did a sample recreation job on this one. We broke it down and rebuilt it, with Jim on bass and guitar. We also had Tammy Payne on drums and backing vocals, along with me. I'm actually singing on this too [laughs]."

"This samples a bit of an old VHS tape recording of a Bristol City game with the fans singing.

"I wanted this album to be a whole relationship between music and football. I wanted to really wear my passions on my sleeve and show what it stood for.

"The cover of the album shows the team, Boca Juniors. The whole name thing comes from them, and my love of 45rpm records.

"The reason I steered towards an Argentinian team was because I loved Diego Maradona. He was a mad character. I was obsessed by his flamboyance. I've never played in Argentina, to this day. My choosing that name was probably my way of trying to get them to book me there [laughs]."

"This features the rapper, Profile, from a crew called the Sound Providers. All of the guest vocalists were people I knew. I've never been one for that 'hired rapper' sort of thing.

"Labels always say, 'This is a hot new guy and he's gonna cost you…' Going that way always gets you rubbish lyrics, and the communication is just really poor. I did this beat with a guy called Stu Matthews. He worked with Aspects, and is still the in-house engineer at State Of Art.

"The beat is chopped heavily on the MPC. Although I was using the MPC, I wasn't using it the way he did."

"There were as many lower tempo and chilled tracks on Pitch Sounds as there were dancefloor/breaks ones. This is almost ambient. It was probably a bit of a confusing direction for the proper DJ heads who knew me from the more up-tempo beats stuff. I was always into albums like Air's Moon Safari. It was my way of doing something like that.

"This style and approach definitely informed my direction on some of the more chilled out projects that I did later down the line, under various different aliases.

"This was me realising that everything didn't have to be squarely aimed at the dancefloor all the time.

"This has a lot of live playing on it too. After Purple Penguin closed I worked in a record shop called Imperial Records. I ended up walking out, as the bloke who ran it was a prick, but I met some great people there. A guy called Ralph was one of them, and he plays horns on here.

"He was an electronica artist and into things like Boards Of Canada and stuff like that. I liked that stuff, so we hooked up to make something in that style. A guy called Chris, who crops up a lot on the album, plays keys too. I never knew his surname. I always knew him as Chris Keys [laughs]."

Jack In The Box

"This one, again, leans on what I would end up doing further down the line with the Malachai project. This was me planting those seeds, I think.

"This was the first time I would sample 60s rock and psychedelic records. I was picking up a lot of that stuff when I was away touring, but I'd always been a bit afraid of sampling it, if you know what I mean?

"I was looping the beats up in a kind of Wu-Tang Clan way, as well. Those guys were an inspiration at the time, with their dusty breaks and tough loops.

"Jack In The Box serves as a nice segue into the next track as well."

"This was a single, with a track called The Boca Breakdown on the B-side. Tammy Payne sings on this. She's from Bristol. I remember her from ages ago. She was signed to Talkin' Loud in the early 90s. She's a brilliant singer and a really brilliant songwriter.

"This track started life as a simple drum loop. It was quite stripped back. We built the track around a rough beat and a change, then when she added the vocal it really glued the whole track together and it made sense. She brought the song out with her lyrics."

"This is just a full-on party banger. It was built for primetime dancefloor business. I brought in a bit of that cut & paste, no nonsense, 120 beats per minute, 'aving it vibe. DJs still tell me today that they still play it out and it goes off [laughs].

"The title is in honour of Lafayette Park in New York. There used to be a club near there that I loved. The first time I went over there was in the late '90s when I was DJing with Ben Dubuisson [Purple Penguin/Hundred Strong]. I remember being completely blown away by the club, and New York in general, and I knew I wanted to make a track to try and capture that feeling when I got home.

"The feeling has stayed with me. I would end up making another track in its honour called Lafayette Afterglow on my new album, as well."

"This was a real early track. I think it was one of the first things I did as Boca 45. It came out on Hombre Records originally. It was just me taking tunes that I was playing in my DJ sets and thinking of a way to make them all fit together on one record.

"This is one of those tracks that I needed to make to glue my DJ sets together. It made for the perfect segue tune. There weren't many of those types of tunes around at the time. It was a total 'DJ tool'. I still play it pretty much every set I play today. It's one of those records that you forget you've made. It feels like it's somebody else's record."

The Way I Feel

"This lets the album breathe a bit. It's like the TLW Revisited track - mellower. I wanted the album to be a bit of an experience, not just party tracks. I wanted tracks like this to have that chilled angle.

"The beat is different to what I normally do. It's an easy listening type beat, with some live piano and spoken word samples. The chord progressions were inspired by the kind of David Axelrod records that DJ Shadow was sampling for tracks on Endtroducing."

"I got MC Retna and Reds on here. I wanted to feature Bristol MCs on the album, and these two were my top picks as they fit my style. A lot of the MCs in Bristol at the time were on that scientific tip. Heavily influenced by all that Anticon Records style. It was very fast Rap… I wanted to get that old school party vibe. Something a bit more groovy, to ride my straight-ahead party jam.

"Retna I knew from his MCing for the Full Cycle drum 'n' bass crew. And Reds was just an amazing hype MC. If you were playing at the Blue Mountain club in Bristol and you could get Reds on the mic for you, you knew the place would go off [laughs]."

"There's a huge vocoder thing in this one. That was a sample that my friend Ian from One Cut had found. He knew I wanted to put together an outro track, and he turned this up. I should have given him more credit for that [laughs].

"He was great, actually. A real sounding board on this album. I would play him a lot of stuff as I was going through it. Ian found me the perfect piece of music to end on. That robotic vocoder voice saying, 'Time to say goodbye…'. It was the only way to end."