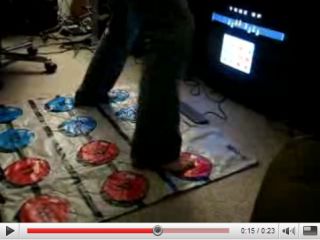 Feet don't fail me now: music through the medium of dance.

In a scene that's reminiscent of the one in Big that features Tom Hanks and Robert Loggia playing a floor-mounted, foot-operated piano, Seth Sternberger of chiptune duo 8 Bit Weapon has posted a clip of himself playing one of his band's songs on a modified version of the NES Power Pad peripheral.

A few old parts from local shops and eBay were used to adapt the Power Pad, which was originally released as a fitness accessory for the NES back in 1986.

Watching the video, MusicRadar was impressed by Sternberger's movement and timing, though his performance does call to mind a man trying to stamp out the last embers of a campfire.