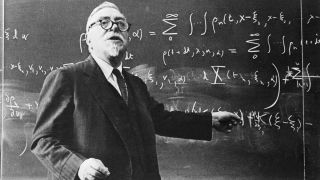 Everything you know might be wrong... (Image credit: Bettmann/CORBIS)

Ask a music production or theory question on any internet forum and you'll almost certainly receive an authoritative-sounding answer within seconds from someone who has a post count in the high thousands.

While this might suggestion that said answer is credible, much of the advice dispensed by these self-appointed 'experts' constitutes little more than regurgitated platitudes that they've read elsewhere rather than empirically observed.

So, before you take the next bit of guidance you read online as gospel, check out our five favourite oft-repeated but misleading music production 'truisms'.

Undoubtedly the most common and unhelpful piece of non-advice you'll find online is 'trust your ears', which is trotted out with tedious regularity by people who don't actually have a useful answer to your question. (See also: 'if it sounds right it is right'.)

You're not sure where to high-pass your kick? Trust your ears! Thinking of using a spectral analyser? Cretin! Why wouldn't you just trust your ears!? They've developed over millions of years of evolution to be the ultimate sound analysis tools!

Unfortunately, when you do trust your ears, you're not just trusting your ears - which can have asymmetric response, lose their ability to detect higher frequencies as you get older, can be affected by conditions such as having a cold or earwax buildup, and suffer from fatigue - but also your audio interface, monitor quality and positioning, and the shape and material of your room and everything in it.

This is why professional studios are designed by acousticians, treated with specialised materials, and use high-end monitors and visual analysis tools such as iZotope Insight.

Our advice? Trust your ears, but only up to a point. Rest them, use reference tracks, check your mixdowns on as many reproduction systems as possible, and grab yourself a copy Voxengo's awesome freeware spectral analyser SPAN to keep an eye on those hard to monitor bass tones and rogue ringing frequencies.

2. Creativity and originality are the most important aspects of making music!

Society regards creativity as something special, even magical, that only 'true' artists possess. People want originality in music, right?

Not exactly: people are straight-up biased against creative ideas, which explains why the same standards get recycled on X-Factor every year, chart hits sound eerily familiar, and everything in the Beatport Top 100 sounds practically identical. In fact, every tune your other-half loves is basically the same: Neil Young wasn't kidding when he said "it's all one song", and, as Nile Rodgers, puts it "the genius is really in the rewriting".

Despite all the evidence to the contrary - including the shocking revelation that Mozart was just like the rest of us and that everyone uses the same samples - we've got some rather confused ideas about originality that are deconstructed in this excellent article which concludes with some excellent advice: be sincere. Alternatively, you could always get into a new field.

Fundamentally, DAWs are calculators at heart. They take multiple audio streams, add them together, and give you the results via your monitors or a bounced audio file.

However, some producers - including experienced audio professionals who you'd like to imagine know better - for some reason think they run on voodoo or some other arcane art. They're trusting their ears, so how could they be wrong?

Well, here's a massive explanation of exactly why these people are as wrong as it's possible to be. Not only that, but anyone who espouses this viewpoint has clearly never done any scientific testing, because if you export the same mix from any two DAWs they'll cancel each other out when the polarity of one of them is inverted.

So, the next time someone tells you that Ableton Live's sound engine isn't up to par, feel free to ignore that and indeed anything else that they say.

4. You should be able to make your tracks sound amazing with minimal gear!

This one is along the same lines as 'a bad workman always blames his tools', and it's true that many producers use just a laptop and a single DAW with no third-party plugins to make their music.

Not a problem if you're making minimal techno, perhaps, but the fact is you're never going to make Green Oak's Crystal do what Spectrasonics' Omnisphere 2 does no matter how hard you try, and as lovely as Togu Audio Line's TAL-NoiseMaker is, it's never going to sound quite like LennarDigital's Sylenth1.

The kit you use is fundamentally important to the resulting music you make, which is why an album of Indian classical music has (erroneously) been described as the earliest acid house record because it uses a Roland TB-303, and why DnB pioneer Omni Trio's Amiga-based Volume 2 EP sounds a world away from the Akai sampler-powered Volume 3.

5. If you don't know music theory or production inside out, you shouldn't even be making music!

Ask an excessively noob-y theory or production question online, and you'll get smacked down by a forum warrior within seconds for having the temerity to put fingers to keyboard before having a comprehensive grasp of mankind's accumulated musical knowledge.

It's almost as if these virtual vigilantes were never beginners themselves, emerging from their mothers' wombs with a working knowledge of post-tonal music theory and the inner workings of classic hardware compressors.

The funny thing is, there are plenty of people out there making great music by trial and error, learning as they go.

Let's take the example of Afrojack, a DJ and producer who earned $18 million in 2013, but apparently doesn't know what 'bars' are. Sure, money isn't everything, but clearly the Dutch dude is doing something right if he can write off a brand new Ferrari like it's nothing while your favourite 'real' musicians are working day jobs to make ends meet.

So, forget filling your brain up with all that useless knowledge people - all you need are some decent samples.