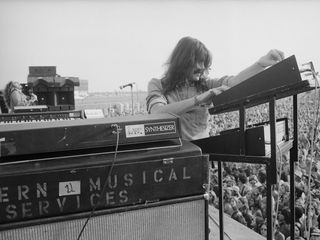 It could have been ten, 20, or 50 - Jon Lord's career was as long-lived as the heavy (metal) rock genres he helped to invent, and that career was peppered with dozens upon dozens of brilliant riffs, accents and solos on piano, Minimoog, Arp Odyssey and, most significantly, Hammond Organ.

Initially inspired by '60s legends Jimmy Smith and Jimmy McGriff, Lord - who sadly died earlier this week - developed his signature style when he teamed with Richie Blackmore in Deep Purple. Blackmore's flamboyant, dominant playing left little space for typical Hammond action, so Lord had to be creative, concocting what he called a "rhythm organ" approach that could stand in lieu of a rhythm guitar, while also muscling through for the occasional solo. It worked beautifully and the two quickly developed an interplay that has rarely been matched.

Lord studied both classical piano and drama and both disciplines would influence his music, not to mention that of a legion of Deep Purple followers. Lord knew when to lay back, fingers swirling slowly and deftly across the keys to build a quiet tension, and when to let loose with a demonic, distorted wail.

A master of dynamics, he avoided the pyrotechnics favoured by contemporaries like Rick Wakeman and Keith Emerson, choosing instead to focus on tension and release, climb and fall.

Here then, in no particular order, are ten examples of Lord at his best. You doubtlessly have ten alternatives and we'd love to hear about them, so don't hesitate to let us know in the comments.

Initially appearing on the 1970 Deep Purple In Rock LP, this contemporary live television performance of the classic tune leaves little doubt as to why Jon Lord is so revered among Hammond aficionados.

A sweltering intro gives way to a bravura galloping rockout wherein guitar and organ trade licks and jabs in an ever-accelerating sonic spiral that at last gives way to the sublime yet intricate organ motif. This was a band that understood the importance of dynamics - something its imitators were wont to ignore.

It's pretty hard to beat the title track from 1974's Burn LP for a full-on blast of everything Jon Lord. From the Hammond power chords to the blistering solo, this one has it all. You can hear the influence of JS Bach and layers of ARP Odyssey effects.

It's that combo of synthesizer and Hammond during the middle bit that stands out, bringing a touch of class to the album that debuted both bassist/vocalist Glenn Hughes and rock mainstay David Coverdale to the group.

Possibly a surprising inclusion given the fact that it contains neither guitar or organ solos, Perfect Strangers - a track from the then-newly-reformed Deep Purple Mark II - is nevertheless oozing with imaginative organ and synthesizer work from the master.

Lord began peppering his live sound with Emulator samples, which were used for the staccato strings when they played this. The eerie eastern-sounding solo during the Kashmir-alike fade perfectly describes the fantasy landscape suggested by the Moorcock-influenced lyric.

Guitarist Richie Blackmore cites it as his favourite Deep Purple Track, and we're not gonna argue with him.

A departure from the blistering proto-metal usually associated with Deep Purple, this two-part mini-epic starts off as a soulful piano-based ballad before switching gears, transforming into a funky, slow rock organ/guitar jam with the focus squarely on the interplay between Lord and guitarist Tommy Bolin. It never tore up the radio waves, but, well, it probably should have.

Another track from 1985's Perfect Strangers LP, it has been brought to our attention that this may be the ideal soundtrack for highway excursions at questionable speeds. That's something, given that Highway Star looms so heavily over this band's legacy.

Still, with its auto-panned guitar solo and resigned off to war lyrics, it does lend itself to pedal-to-the-meddle highway journeys. Yet, as always, it's Lord's Hammond that holds the whole thing together, adding a tense urgency to the cacophony.

Their first hit single, from the debut album Shades of Deep Purple, this Billy Joe Royal cover (written by Joe South) is transformed into a funky psychedelic burner, thanks in no small part to Lord's stuttering, skittering organ riff, stylishly offsetting that irresistible bass line.

Organ accents punctuate the action throughout, adding just the right amount of interest before stealing the show with a solo that sounds at first anticipatory, champing at the bit to get out of the gate, then ferocious, only to eventually be tamed by the maestro. It's nothing short of breathtaking.

We couldn't compile this list without a nod to the masterful Machine Head album from 1972. It's virtually impossible to choose a best tune from that classic LP, but Highway Star is as good an example as any of Lord's rocking Hammond jamming, with a slithering, wailing solo that lasts a full minute, yet never for a second stalls the pace of this early metal monster.

Just try to imagine this track without the organ and it falls utterly limp. It should be mandatory listening for every would-be rock keyboardist.

Knocking on Your Back Door

The lyrics to this blistering opener from Perfect Strangers demonstrate that Deep Purple Mark II had taken the term 'cock rock' to heart. Full of single-entendres and schoolboy innuendo, Shakespeare it was not.

Yet it was not out of place at the time and, bolstered by a thumping mid-tempo beat and Blackmore's slinky six-string shenanigans, it kicked off the new DP with a heavy hand that put paid to the pervasive glam-metal whippersnappers that were pilfering the mantle of metal and accessorising it with lipstick and copious amounts of Aqua Net Extra Super Hold.

Here, once again, the organ takes a backseat to the guitars, but only after setting the stage with a dramatic intro that also quite shamelessly introduces string samples to the Purple haze. Yet Mr Lord may be the only subtle voice in the crowd on this one.

We gotta put at least one Whitesnake song in, y'know? Not to be confused with the later hair-sprayed version, this original take on the song appeared on 1982's Saints and Sinners album is as un-glossed and honest as the latter version is calculated.

It is of particular note for the Hammond washes that glue the whole thing together. We can't think of a better way to show just how important Jon Lord's contributions were to his fellow band members. Take him away, and what do you get?

Lord was a master of support. He had the chops to play like Emerson, Wakeman, et al, but generally preferred not to do so, instead using his skills to orchestrate complex, layered accompaniments to his bands' often over-the-top histrionics.

Yet the man could and did demonstrate astonishing skills. This clip from 1996's Perpendicular tour is a tour-de-force showcasing his deft hand(s) and an ability to combine a variety of styles into a cohesive performance. And, it's all Lord and so a fitting way to end our tribute.