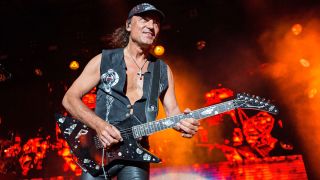 “We have to play - and like to play - the hits,” answers Scorpions lead guitarist Matthias Jabs, when asked what to expect from Scorpions’ first show of 2019 at the inaugural Rock The Coast festival in Málaga, Spain this summer.

His band simply wouldn’t be able to leave the stage without fans hearing hits like Rock You Like A Hurricane, Still Loving You and Blackout, he reasons. There lies one of the German group’s biggest challenges - distilling their prolific 54-year career into a tight two hours of rock ’n’ roll mastery…

“Those favourites make up half the setlist right there,” he continues. “On our last tour, we edited together a '70s medley and currently we’re working on the possibility of an '80s medley. Fans want to hear songs from every era, and the show is only two hours, so we try to combine as much as we can.

“It will be our first performance since last November in Shanghai. We’ve been on a writing break since then. It’s the longest break we’ve had from the stage in a very long while, maybe even in our career. I always feel excited about that first show. We won’t be rusty, though… don’t you worry!”

Headlining the other night is Ritchie Blackmore’s revamped Rainbow, with a stellar supporting line-up across the weekend include names as revered as Opeth, The Darkness, Europe and UFO.

As it turns out, the Deep Purple guitar god - arguably one of the more elusive characters in the pages of rock history - is someone Jabs has known well since the early '80s…

“I spent a lot of time with Ritchie when he was in Rainbow,” recalls the Scorpions axeman. “We toured the US together in 1982 and even played soccer together. Unfortunately we beat them and Ritchie was very disappointed about that.

“We’d sit for hours in the famous Los Angeles Rainbow Bar And Grill. I remember telling him it would be a great idea for Deep Purple to get back together and - I don’t know if they’d already planned it - the following year, it happened at the Texxas Jam.”

Here, the German guitar wizard looks back on his career in guitar up to this point…

Before you joined Scorpions in 1978, you bought the brand-new 1976 Gibson Explorer that would end up being heard on a lot of early Scorpions classics…

“That was a lucky purchase, so to speak! I needed a counterpart to [founding guitarist] Rudolf Schenker’s Flying V. When I bought this guitar, there were two to choose from. I picked the better one, of course, because it sounded so good.

“And as you say, it got used on all those famous songs through to the mid-'80s, where I switched to the Explorer 90 - which I designed at a music fair in Frankfurt when I met the Gibson guys. The following albums were made with those Explorers, though I’ve always used a Strat in between a Tele or Les Paul for more sounds.”

When’s the last time you used the original ’76?

“I haven’t played that original Explorer live in a while… it’s packed away. It was actually kept in Cleveland at the Rock And Roll Hall Of Fame, insured for half a million.

“They had it for a year, then when we re-recorded old songs for Comeblack in 2011, I ordered it back. They shipped it over to the studio so I could get the authentic sounds.”

At the turn of the '80s, you famously put gaffer tape stripes on one of the guitars…

“In 1979, I sprayed that first Explorer white myself with a spray can from the DIY shop. Then in Minneapolis, I saw ‘77 Explorer in white, which I bought and used as a second guitar. That was the moment I decided to put gaffer tape on one of them, making those stripe where the pots are.

“It was a spontaneous decision and everyone loved it, including our lighting designer who told me it could be seen for miles. Later on, it would get painted on at the Gibson factory and it’s been there ever since.”

In 1984, you were given one of the first instruments made in Gibson’s Nashville Custom Shop…

“That is also true. Unfortunately, I sold it to a friend of mine. It’s a Firebird with two humbuckers, star inlays and was one of the first Nashville-made guitars, after they moved the Custom Shop from Kalamazoo in 1983. I didn’t expect you to know that, haha! That’s surprising, but you’re right… it was early 1984 when they got started.”

Then you started playing guitars made by Boris Dommenget, fitted with Musclebucker pickups…

“Yes, you mention the Musclebucker - honestly, I’ve never heard a pickup with so much output and yet still all the clarity. We used relatively high gain, yet you can hear every string in a full barre chord without it sounding washy, like one noise. You can hear all the individual harmonies – those are some great pickups.

“A lot of care goes into Boris’s guitars. He uses the best wood, with a stock of 'orina mahogany that’s very old (late-'50s), plus he uses nitro lacquer, which is the key to that sound. It’s the kind of cellulose that rubs very well into the wood, the vibrations feel more unlimited, as opposed to a polyester lacquer that feels more like a diving suit! You feel uncomfortable. Nitro is more like silk pyjamas by comparison!”

Not forgetting, of course, your usage of those rather eye-catching Anca models. You’ve certainly used a fair amount of instruments over the years…

“They’re very well done graphically. Guitar-wise, they’re not that great, but they look fantastic. Being a big Hendrix fan, I started out on a Strat but then I always like the Les Paul sound. The Explorer felt the best for me, for both shape and sound. I do most of the overdubs in our music and you cannot just have one sound all the time.

“So I have great Strats, Teles, even Les Pauls with P-90s from 1955 which can sound so tough! On the most recent albums, I record the left side with a ‘58 and right side with a ‘59 that has a Bigsby, though it depends on the song.”

You’ve used Marshall and Soldano extensively over the years. What do you look for in an amp?

“I look for clarity and punch - they need to have that reaction. When you have too much gain, the percussiveness goes away. I want my guitar to have attack and be there on the spot. I don’t want the sound to develop over milliseconds. It has to be more urgent, so I’m using less gain that I have in the past.

“Right now, I’m using this great-sounding Skrydstrup amp, made by a Danish guy who custom-builds it all for us. He works for David Gilmour as well, plus micro amps for vocalists and more. I’ve always used Fender Tonemasters in the studio, plus Marshalls, and I have my old Soldanos for whenever I need.

“Those Tonemasters are too loud for the stage. In the studio it doesn’t matter. I think they’re 140 watts but it feels like 300… absolutely killer. The clarity and sustain without gain has everything you need. They’re hard to find, by the way; they stopped making in the mid-'90s, but I own two of them!”

Who were your biggest influences growing up?

“I learned from all the blues guys from the '60s: Johnny Winter, Jimi Hendrix, Eric Clapton and Jeff Beck, but I’m also self-taught. I used to listen to violin concerts that I picked out of my father’s record collection, pieces like Felix Mendelssohn’s Violin Concerto in E minor, Op. 64.

“Most classical music didn’t feel catchy, but this did. I learned the arpeggios as a violin would play them, which influenced me a lot. So I’m classically influenced and bluesy.

“In the '70s, I liked a lot of the jazz-rock people like Allan Holdsworth, John McLaughlin, Al Di Meola - it was totally insane stuff that you can’t incorporate into Scorpions, with our almost pop touch…”

Those pop sensibilities could very well be the secret to Scorpions’ enduring success...

“We play a very melodic kind of rock - when you listen to things like No One Like You, you can hear how it comes from the guitar melody. In America, they used that to promote the shows before it even got to the vocals because everybody recognises it. All the leads and embellishments should all form the melody of the song, the essence of the music.

“Some songs are good for the fingers but don’t mean anything after that… It’s important to remember even the fast stuff needs to have melody. Leads should make the song continue and if possible, even lift things up a little bit. It doesn’t always work, but can sometimes.”

Rock You Like A Hurricane is definitely a solo that lifts things up. How did you write that one?

“That’s exactly the kind of lift I mean. At home with my Tascam four-track recorder, I worked out the intro and outro, including the harmonies. I came to the studio, Dierks Studios in Cologne, and started playing. By the time I finished the harmony, everyone loved it. The producer said it was like the sun coming up.

“To write a solo like that, think about the riff alone. Imagine an empty space. I always start from nothing and finish with harmonies. Back then, it felt like everyone was trying to find new ways to play lead guitar. Today, it’s not as easy. Everything has been played - even for myself, it’s much harder to find something truly exciting.”

Brian May, for example, has always followed a similar creative philosophy - always looking for new ways to phrase and orchestra his solos…

“I like guitarists with style and taste - that’s always been the goal with my playing. I’ve always loved Brian May’s playing and tone. We sat together at the first Echo Awards, just after Freddie had died. He came over to our table and we both told each other how tasteful we found each other’s playing.

“It was amazing… we carried on talking in this bar, and he told me how nervous he was when Freddie came up with the song We Are The Champions. He said at the time, ‘Freddie, we can’t go on with that, people will throw rocks at us!’ He was more like the shy guy in the band, but together they were incredible. It was a lovely first encounter.”

Finally, how is new material coming along and when can we expect to hear it?

“Soon, I’m pretty sure… we started talking to a producer we would like to work with at the end of last year. We were supposed to have a meeting now, but it would have been too rushed, so it’s been postponed.

“We are busy until the end of November, going from Europe to South America, then to Russia and other countries… so the plan is to record our next album early in 2020.”