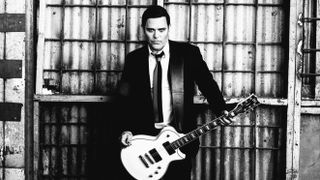 Richard Z. Kruspe could very well be one of the world’s most underrated guitar players.

Despite having grown used to topping the charts in much of Western Europe including his native Germany with Rammstein, selling millions of albums and being the last to perform on any stage they step foot on - it’s easy to lose sight of the concrete heaviness he’s maintained in the group he co-founded in 1994.

The fire and flames of their daredevil stage theatrics have always dominated the headlines - such smoke and mirrors, it must be said, that wouldn’t be anywhere near as effective without that sonic backdrop of muscular finesse…

Rammstein’s Paul Landers: "I’ve always been the no-amp guy! I have never really bothered with them"

In many ways, Emigrate was started in 2005 as a vehicle for the ideas he wanted to pursue that existed outside that industrial-metal framework. Just before things get seriously busy with the day job - bandmate Paul Landers telling this writer back in October that their seventh full-length has been “inspired by our live sound” and “will be coming out next spring” - Kruspe has unveiled Emigrate’s third opus, titled A Million Degrees.

Here, the Emigrate singer/guitarist tells MusicRadar the secrets behind writing the fieriest riffs of the modern age and how he gets the sound in his head out of the tools in front of him…

You’ve stuck to your guns with your rig over the years. Was there anything new in the general signal path for A Million Degrees?

“It’s true, I haven’t really changed my equipment much over the last 10 years or so. My main guitar is the RZK-1, the ESP version, but it’s one particular prototype that I use. That goes into one of my Rectifiers - I have three that I choose from for my main distortion sound, then fed through a Mesa/Boogie 4X12 Celestion-loaded cabinet.

“But this time I did change my microphone configuration - normally, I use the Neumann M149, which I did again this time, though instead of using a U47, I had an old vintage microphone.”

What kind of difference did that make?

“That gave me a bit more of a mid-punch, so those get blended into the Neve 1081 preamp that I’ve always used and from there I go straight to Pro Tools.

“For certain crunch sounds, there’s a holy grail amp I go to, and it’s the Mesa/Boogie Mark IIC+. While I don’t use it for distortion or leads, it does have these really unique crunchy sounds. The sound has so much identity, it’s very characterful. Though sometimes I might also use a Friedman amp for a different kind of crunch tone.”

Was it purely analogue or did you have some digital gear in the mix as well?

“Actually, nearly all the clean sounds were just me playing around on a Kemper with things I’ve profiled myself or in the past or bought online. I wasn’t really expecting much from it at first; I was suspicious, and to be honest, I was kinda doing things wrong. When you’re profiling it’s easy to get led down the wrong way.

“The Kemper is great for live situations; it’s so much easier than building that big rig that will usually be very complicated. Ever since I started using it, everyone in the crew loved me. They must have hated me for all these years, but now they think I’m great, haha!”

In your experience, how close do you think the Kemper Profiler gets to the original sounds?

“The Kemper still doesn’t quite have all the dimensions of a real amp. It’s close but it’s not 100%. I think the reason why is down to the CPU power needed to profile speaker movement and even the air that it’s pushing - all those other things will need more power. But it’s pretty close! And it comes in handy when you’re writing demos. Sometimes I’ve spent hours finding the right sound when I should have just been writing the song! I can be such a geek when it comes to guitar sounds. The Kemper has allowed me to focus on writing rather than changing the gear.”

And what about effects? You tend to be quite minimal when it comes to extra colour…

“I mainly recorded everything clean and then DI the signal later on through effects. I tend to use plugins more than outside gear anyway, because I find it easier to change the configurations. But there is one thing I discovered last year, which is the [Gamechanger Audio] Plasma Pedal… it’s just has this great fuckin’ fuzz sound.”

Are there any plans for a new signature RZK-III?

“I’ve been thinking about a new signature over the last few years but haven’t had any concrete ideas of where I want to go with it. There’s still work to do, though, to be honest, it could still come out next year.

“Honestly, gear-wise, I’m pretty much set. In the studio, as much as I love my guitars, I also love trying other things out like new synths or plugins. That’s more interesting than getting another amp, which used to interest me, but I’ve found the sound I like. I don’t need to search any more, trying different things out of necessity. I have my cleans, crunches and distortions - they’ll always remain the same, so naturally I’m more into compressions and EQs than finding a new amp head.”

There are some very unusual Middle-Eastern/harmonic minor leads on the opening track, War...

“I must admit, that wasn’t me playing, haha! Here’s the story: in East Germany, there was a player that was like our Jimi Hendrix. He was God out there! I was working in a bar where he drank at a lot and used to give him loads of free drinks because he was such a hero.

“One time, I asked him if he could show me some things on the guitar and he was like, ‘What the fuck, me show you?’ and just left. I took it in a very bad way, thinking he was an arrogant fuck. Over the years, I felt anger towards him. Then, years later, I met him and asked him about it. He explained the reason was because he genuinely felt he couldn’t teach me anything. I had taken it totally in the wrong way. So I asked him, as a favour, to play a solo on my song and that’s what he did!”

Hide and Seek is surprisingly rockabilly and even bluesy in style, yet somehow still carries your signature swing...

“That’s what Emigrate is all about! I grew up with so many different musical styles around me. It was always hard to admit I loved metal, blues and pop music. From my experience, in certain scenes people can be very intolerant of other styles of music… I always hated that!

“Even in Rammstein, there is a certain sound we do but we’re limited, in a way, whereas Emigrate allows me to explore any genre I like and feel just as in touch with it, music that has this emotional high for me. A lot of people tell me that when they hear Emigrate they think it’s not just one style, it keeps changing, and that’s exactly what I like about it. We’re not predictable. You listen to the records and every song feels like I’m taking you in another direction.

“The music just comes out of me… sometimes I think deep inside I’m a little sensitive boy that just wants some love from the world, haha!”

Some fans might not have expected you to be a blues guy. What kind of artists inspired you and in what ways did they inform your understanding of music?

“Well, when I grew up in East Germany, we didn’t really have records. We only had tapes that got passed around. I grew up with all the old-school guys like BB King, Muddy Waters and John Lee Hooker. Going further on, when the Stones started playing that American blues in their own way, that was also very interesting.

“I like how in culture people take certain styles and change it in ways. Look at Led Zeppelin: they took something and created their own sound out of it. We don’t live in a vacuum - we all listen to things and get inspired, taking it in and moving it somewhere else… that’s how music starts to live and breathe!”

Your riffs have almost been consistently muscular through the years, from Asche Zu Asche, Sehnsucht right up to more recent tracks like Ich Tu Dir Weh. What's the secret to those right-hand rhythms and sonic urgency?

“One of my favourite guitar players growing up was Malcolm Young from AC/DC. And funnily enough, the only time Rammstein have supported a band and gotten booed was supporting them! But I stood on the side of the stage watching Malcolm play afterwards and was totally blown away. That guy’s right hand was unbelievable!

“A lot of people in the '80s were practising how to be as fast as possible and shred, but I find this more impressive. A lot of the time when I listen to other players, all I want is a simple riff like [hums AC/DC classic Sin City] and it feels like that’s the one thing they can’t do! It’s very important to have that rhythm in your right hand. Malcolm was the master!”

The rhythmic interplay between the guitars and drums in Rammstein has also been interesting - though they’re mechanical in feel, songs like Mein Teil and Engel almost seem to push and pull in places...

“Actually, it’s not the drums that are behind... it’s me playing off the beat. The secret to our sound is him [drummer Christoph Schneider] being very on the beat. If he’s not, he’ll get edited to on the beat, haha! But I try to lean back and stay just behind that snare drum, which can give a different feel to certain riffs.”

Your last Emigrate album featured one of Lemmy’s last recordings on the track Rock City. Looking back now, you must feel pretty honoured to have worked with him...

“Totally. It gives me goosebumps listening back to that song. The way he did it all was important, too - there was no maintenance. He just went into a studio, sang the song and sent it back to me the next day. He was easily one of the coolest people I’ve ever worked with.

“Unfortunately, all of our heroes will disappear eventually. Things are changing; rock is almost dead… I don’t want to complain saying it was better back then; it’s just different now, and I certainly will miss all those characters who saw everything and experienced everything in rock ’n’ roll. It was such an honour to have him sing one of his last tracks on our record.

“I don’t know if he’s reading this or has come back as someone else, I have no idea, but I just want to say thank you. When he agreed, I was jumping up and down on my bed like a child. I was so happy. That’s what Emigrate is all about: the emotion I get from working with new people.”