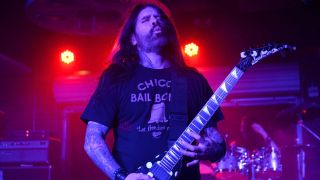 Since parting ways with one of the world’s biggest metal bands, Phil Demmel has been busier than anyone could have possibly imagined - himself perhaps most of all.

The ex-Machine Head axeman, who left with drummer Dave McClain towards the end of last year, has reformed Vio-Lence, reissued the 1996 Torque album that he also sang on, brought out a new line of signature Jackson guitars and started putting new projects in motion.

Then, of course, there was that time he got a text from Kerry King asking if he could join Slayer for a string of shows in Europe covering for Gary Holt, who was tending to a family emergency. Demmel had only played his last show with Machine Head the day prior…

“I think Slayer saved my musical career in some way,” he humbly admits. “In under 24 hours, I went from the last day of a tour wondering whether I was even good enough to be bands any more to this mind-blowing text from Kerry King asking if I could play in Slayer.

“I guess the reason I’m in this position now is because of the people I had met, almost from a networking standpoint. I knew the guys in Slayer before I got that text. If being a session player is the route you want to go down, I would say avoid getting too centrally focused on one style. Watch that Netflix movie Hired Gun: everyone they talk to explains how session players are there to do whatever the artist wants - you have to play what you are expected to...”

Right now, however, Demmel is on a path of self-discovery - enjoying the freedom that comes with no major commitments to anyone but himself and his family. Having wowed audiences for the last 16 years at every metal festival the world over, he’s certainly paid his dues…

“I want to be honest to who I am as a player,” he continues. “I was already 36 when I joined Machine Head. Then there was 16 years of that and now I feel like I’m just getting started again. Things are popping up. I’ve done a few guest solos here and there as well as music for video game companies.

“Mainly, I’m just enjoying being at home and running the business - me and my wife Marta bought a bar where we live and it’s doing well. There will be a solo record at one point I’m sure, so let’s see what happens. I’m flying by the seat of my pants right here!”

So when did you realise it was time to update the Jackson Demmelition line?

“I went to NAMM in 2017 and went to one of the Custom Shop early shows. I saw the new X-Stroyer they had made and had an instant boner, like, ‘Oh my fucking god!’

“I had a Destroyer really early on and it’s always been one of my favourite body shapes, so I approached Kurt Walton and Mike Shannon about doing a custom shop one for me. And they made this badass baritone out of mahogany - the things weighs like 40 pounds or something ridiculous like that. It’s the best-sounding guitar I have, so after talking to them more about my line, we decided now would be a good time for a Demmel X-Stroyer. It felt right to switch things up and go in a different direction, as we’ve done Vs for the past decade or so.”

“It’s something that my wife Marta came up with. In the fashion world, that kind of fade they put on dresses is known as ombré, so that’s how we came up with the idea. There’s so much more body surface on an X-Stroyer, so the blend really pops out on that one… it’s so cool.

“Then there’s the piranha inlays - I like those little guys. Most of my customs just have a blank ebony fretboard, maybe something on the 12th fret but mainly sleek. Which these new ones are too, but you still have that signature Jackson kinda look…”

And both the Red Tide Fade and Snow White models feature a one-piece maple neck-through?

“Yup, that piece of maple going through is very important for a bigger tone, especially on the red Floyd model. What I find myself playing more and more is the Snow White with the fixed bridge - there’s just something about that string-through that makes it resonate loud.

“I did this Metal Allegiance show not long ago and used it the Anthrax song Only with John Bush - it was a fuckin’ honour singing harmonies along with that dude. Playing that song on that guitar… it just totally ripped.”

You’ve stuck with EMG pickups for quite some time now...

“Absolutely, the 81s I’ve been using since back in the Vio-Lence days, probably the second record. I’ve been with them for a long time. I used to have an 85 in the neck but switched to a 60, which is a little warmer and bluesier. It seems to catch the bends a bit better... It’s the Hetfield set - I don’t know if they call it that anymore, but it definitely works.”

Joining Slayer for part of their farewell tour must have been beyond your wildest dreams...

“It really was. Having that experience and stepping in there, being able to pull off 19 songs in just a matter of days, I’m really proud of what I accomplished. But I’m even more proud that I made them proud and was deemed worthy enough to be in that position, for Gary to hand over the keys to his car for a few days. Tom, Kerry and Paul really took me in and sang my praises.”

Is it strange looking back at footage from those shows, even all these months later?

“I’ve looked back at some of the pictures just to remind myself there was pentagram pyro going on behind me and upside-down cross! I was so locked into doing them justice that I didn’t notice the chaos around me.

“That first night the intro tape started rolling and I was stood next to Tom thinking, ‘Holy fucking shit, I’m in Slayer right now!’ He was constantly fucking around with me and pretending I wasn’t where I was supposed to be. It was the experience of a lifetime and I’ll always treasure that.

“The world of Slayer is amazing. They should have their own section in Disneyland - next to Fantasyland, Tomorrowland and Frontierland you have should Slayerland!”

So, what was the hardest song of the set?

“Well, there were some songs I wasn’t all that familiar with, some of the newer stuff I’d never heard before. But those songs were about three minutes and I managed to map them out.

“From a speed standpoint, it was Dittohead. That’s one fast tune! You think you know all the parts to a song like Postmortem - I’ve played it before - but you don’t. There are little things they do that a lot of people don’t pick up.

“I thought I knew Chemical Warfare - it’s one of my favourite Slayer tunes - and it completely blew me away... there are so many little nuances to it. The picking is so fast, there are so many different parts in weird keys. I remember thinking, ‘Fucking hell Kerry, what is going on in this lead break?!’ I’d ask Gary and he’d tell me it was in some indecipherable key, so I just fuckin’ hit the trem the whole way through, haha!”

It was nice of Gary to publicly thank your wife, too, considering you probably hadn’t even unpacked your bags from the last tour…

“Totally. When Kerry texted me, I didn’t even reply until I showed Marta and got her blessing. I’d been away for two months solid on this heartache of a Machine Head tour. Our two-year old was going nuts and she was trying to run our business from home by herself. She was really looking forward to me coming back to help.

“The last night of the tour, I told her to come down and party it up. I’d drive her home and look after the kids in the morning. So she came, got hammered, got in the pit and passed out by the end of the night. The next day she’s not feeling well and the text came in. What a trooper she is - through all of that, she said, ‘You have to go and do this!’ She is the reason all of this was possible.”

Some fans may not have been aware you also fronted Torque in between Vio-Lence and Machine Head. What was the story behind the recent reissue?

“I had these four unused songs we recorded towards the tail-end, right before I quit music for a couple of years. I was trying to find Torque record on Spotify or iTunes and it wasn’t there. So I went to Mascot Records and said I had some unreleased material, asking if they’d be interested in a rerelease or putting it out as a standalone - they suggested doing a proper re-release on vinyl with the extra songs as a bonus.

“I just wanted it out there as part of my legacy and readily available in the digital age. It’s a timeless record. There’s a lot of Pantera, Prong and Machine Head kinda stuff there.

“Actually, when Robb left Vio-Lence, everyone was like ‘Damn, Machine Head are pretty fuckin’ awesome!’ When I joined them later on, it was great because I didn’t have to throw away the riffs that sounded like Machine Head, haha! I was now in Machine Head.”

2019 mainly looks like you’re mainly going to be busy with Vio-Lence, then...

“Yeah, we’re probably not even going to do a Torque show, but this Vio-Lence thing is really taking off. Sean [Killian, vocals] text me a while ago saying we should do a show, but the last time I had seen him, he wasn’t looking that good! I asked him what he was talking about: going to the movies or something or playing with Vio-Lence?

“And now it’s really taken off: one show turned into two shows and we just announced our first overseas show ever. It’s blown up into these little one-offs all over the place. It’s exciting there’s that much interest, and jamming with the dudes has felt great - the songs are still there and Sean’s voice is sounding great.”

Clearly, you’re busy enough as it is... but are there any plans for a brand-new project?

“There’s something new in the works... I don’t want to say supergroup, but if it comes to fruition, people are gonna shit themselves! I’ve also been talking to Roy Mayorga from Stone Sour and James Lomenzo [Slash’s Snakepit, Megadeth, Black Label Society] about doing a loud Motörhead kinda rock ’n’ roll band. Me and [Dave] McClain are definitely gonna jam together, too...

“Funnily enough, the day after I got home from the Slayer tour, I got another text about another crazy tour which didn’t quite work out. It means a lot for a musician to be wanted, appreciated and have their craft be liked and respected. Those are feelings I hadn’t had much of previously! Having all of this has been really humbling, exciting and gratifying.”