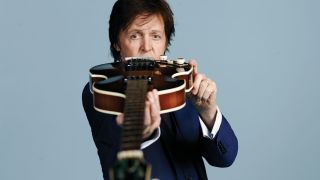 Paul McCartney has hit back at Quincy Jones’ rather incendiary remarks about the Fab Four’s musical ability, calling the veteran producer a “crazy motherfucker”.

Speaking in an interview to Vulture earlier this year, Jones hit out at the state of pop music and how today’s producers are “lazy and greedy” and “don’t know what they’re doing”.

In a very revealing interview with GQ, Macca tells of how Quincy called him up to apologise, saying that the former Mercury Records VP, in fact, never said those things about The Beatles in the first place.

“I never said that. You know I love you guys!” McCartney says that Jones told him, to which he replied: “If you had said that, you know what I would have said? Fuck you, Quincy Jones!”

In the GQ interview, Paul went on to say: “I love Quincy, even after this. He’s a crazy motherfucker.” He went further by saying “But I respect him, he’s done a lot of very good things.”

Pondering what might have led to Jones’ outburst, McCartney said: “He’s an old guy. I don’t know what it was. But I don’t think I’m the worst bass player he’s ever heard. Or maybe he’s never heard bad bass players.”

McCartney’s latest album, Egypt Station is out now on Capitol Records, while ‘Quincy’, a documentary about the legendary producer, is due to be released on Netflix on 21 September.