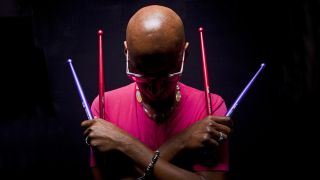 Best of 2019: From playing the drums professionally with his dad at the age of ten, Omar Hakim’s career has spanned the musical spectrum from jazz and fusion to rock and R&B, as he’s worked with the likes of Sting, Herbie Hancock, Mick Jagger, and Daft Punk.

“I’m comfortable no matter where I go,” says Hakim. “I wasn’t interested in being labelled a jazz drummer or a funk drummer or a rock drummer. My thought was, if I could just be a worthy collaborator that just happens to play drums, that’s what I wanted to do with my career.”

When Musicradar talks to the drummer, he’s on tour with Ozmosys, his new project with his wife Rachel Z on keys alongside guitarist Kurt Rosenwinkel and bassist Linley Marthe. The quartet released the EP Eyes To The Future Vol. 1 earlier this year and a full album is due to arrive in 2020.

“Omar and I were looking for a sound that ranged from the beautiful intimacy of acoustic trio but with synth colours and interesting electronica to some raging dance, house, world and alternative rock beats found in today’s music that we love,” says Rachel Z.

“I wanted to create a live EDM-improvised dance music which would feature organic grooves that would create a pulsating mantra that stimulates mind, body and soul. It had been my mission to marry these worlds!”

The concept was inspired in part by Hakim’s experiences playing big jazz festivals with Nile Rodgers and Chic. “I thought to myself when I was doing these gigs with Nile, these are jazz festivals but the headlining artists, including us, are not jazz artists,” he says.

“I said to Rachel, let’s do a bigger sounding project, let’s do a project where we can open up the audience and incorporate some of the things I’ve done with other artists I work for in terms of coming up with really fun grooves. Just do what we do but do it for ourselves, instead of creating it and giving it away.”

Catch Ozmosys at the Southbank Centre on Saturday 16 November as part of the EFG London Jazz Festival.

“One of the very first drummers I remember hearing as a child was Art Blakey. My dad, being a jazz musician himself, that’s the music that was playing in the house when I was growing up.

"Art Blakey And The Jazz Messengers were at the top of the playlist and it’s interesting that Art Blakey’s saxophonist and one of his main composers would be somebody that I would grow up to work with, Wayne Shorter.

“You can’t plan that sort of thing. What I liked about Art’s playing, and I like a lot of drummers that take this approach, is that even though they have the technical facility, they don’t let that approach drive how they frame the music rhythmically.

"I like a more passionate approach to dealing with the rhythmic aspect of any band that I’m in. What I hear with Art Blakey is, first of all, he had a super strong groove. The groove never suffered.

"Even behind the most involved and complex solos he kept that band propelled in a way that had your feet tapping all the time. I think that approach to drumming got in my mind and in my bones early.”

“Another drummer that I love that might have been more technically proficient than Art Blakey was Max Roach, but still Max had that passion that I’m talking about. Even though he might have played with a more refined approach, it still had that passionate delivery that made it very exciting.

"One of the records I remember growing up with was Clifford Brown & Max Roach, that’s a gorgeous record and one that I put on recently, it’s just so fun to listen to it many years later.”

“My dad had a record of the Buddy Rich big band when they were doing West Side Story, live at the Chez Club, Hollywood. Those arrangements that he did, it’s amazing, and there are some sick drum solos on that record too, it’s so exciting.

"It’s been a really long time since I listened to it, but it was a record that just blew me away, man. I’m going to have to go back, grab that one, and have a listen again. Fabulous.”

“It’s funny because the first time I heard Billy, I didn’t know what to make of it. I was around eleven years old, I had a cousin who played bass and was really into rock and fusion. He played me a record called The Inner Mounting Flame by the Mahavishnu Orchestra and when I heard this record, being so young, I was like, ‘What is this? What is going on there?’

"It was insanity to me, especially growing up at the time where my dad was listening to bebop and more traditional or modern jazz, and the kids my age were mostly listening to R&B, soul music and rock. The Mahavishnu Orchestra blew me away and I became a huge fan of Billy Cobham, really expanded my mind, and then he did the Spectrum album and that really floored me.”

“I grew up where James Brown was blasting out of stereos all over the neighbourhood. You can’t get away from Clyde Stubblefield and John Starks. These guys, to me, created the blueprint for the new approach to R&B at that time period, the mid-to-late ‘60s.

"The way James Brown deployed their rhythmic talent into the band and into those arrangements, it brought the drums front and centre in this new funk music. Growing up during that time period, you had to understand and learn how to play that language.

"If you were in a cover band, those were the hits, so I had to sit down and practice with those records, and I think practicing with those records gave me the information that I needed to really understand what groove meant and the discipline of how to support a band in that way.”

“Another guy I love was the drummer for Sly And The Family Stone, Gregg Errico. I just love Gregg Errico’s groove. That’s what makes those records work. If he was an undisciplined kind of groove player, there wouldn’t have been the space for Larry Graham’s thumping bass style to exist inside of that music.

"It was like this way of playing was that you would have a puzzle of these interesting and amazing pieces that would all come together to form this amazing, syncopated, dancey feeling. A song like Thank You really needed Gregg to have the discipline to hold that groove down so that bassline could work. That’s a great blueprint for funk. I love Thank You, just the intro alone is amazing.”

“One song comes to mind from my childhood that all of the drummers in the neighbourhood had to be able to play, Rock Steady [recorded by Aretha Franklin]. The solo to Rock Steady was really a drumbeat. It wasn’t like break it down to start doing a lot of pyrotechnical fills.

"It was him coming right out of the groove and maintaining the feeling but just playing incredibly funky. What a sound, what a groove, another very disciplined guy who could play with an amazing smooth and natural feeling.”

"I had a talk with Verdine White, Maurice’s brother, about this and Verdine told me that when they would do sessions with Earth, Wind & Fire, Maurice would play drums and he would direct the arrangements from the drum set.

“That makes sense to me because when I listen to some of their songs, you hear kicks in the arrangements that a drummer would do. A song like Shining Star, he would create those breaks and make the guys play along with him. Maurice was a genius, badass drummer, and of course singer, songwriter and arranger. He needed another drummer to play live so that he could get away from the drum set, and they got Ralph Johnson, who is from Los Angeles and who has a wonderful feel.

“Then as time went on, Maurice got his younger brother Freddie White to join and they had two drummers onstage, Maurice out front playing timbales, Philip Bailey playing congas and percussion, and everybody singing. That band was like rhythm heaven.”

“Lenny is like a force of nature. I had a local band when I was fourteen, playing rock, funk, reggae, soul music, fusion. We were playing the local bars, dances, community centres, weddings, stuff like that. I was the youngest guy in the band, I was fourteen, and the bass player, being the oldest one, was into Scientology. He said, ‘I met these guys at a Scientology meeting, Chick Corea and Stanley Clarke.’

“I knew exactly who they were, I was like, ‘You met who?! Really?’ He said, ‘They’re going to come down and hear us play next weekend.’ I was flipping out. We had a New York City Parks Department Pass. Every Sunday we would load our van, drive to the city, and play for free in the park.

“We got a lot of gigs like that, and people would throw money in the guitar case. We get there that following Sunday and sure enough Chick and Stanley show up, they loved our band, and they said, ‘Hey guys, can we bring our band next weekend?’ Now I really flipped out at that point.

"Sure enough, the next weekend they show up with Billy Connors and Lenny White and they’re playing music from Hymn Of The Seventh Galaxy. They had just finished recording it.

“I was like, this is insane, watching them work that music out live. We ended up playing a few gigs with them on the East Coast.”