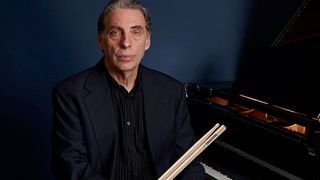 When Herbie Hancock refers to you as ‘a great jazz drummer’ you know you’re doing something right.

That is just one of many accolades bestowed up Mike Clark during a career which has spanned a staggering seven decades. The US-born sticksman has made his mark as a tasteful jazzer, a fusion pioneer and a funk master as he got behind the kit with the likes of Brand X, the Headhunters and the aforementioned Hancock.

He’s also an accomplished bandleader with a wealth of solo records under his belt and is one of the most engaging clinicians out there. Given that he started playing aged just four, and that he turns 71 this October, you’d expect that Mike has plenty of drumming knowledge to share.

We found this to be very much the case during our chat with him, and he was only too happy to pass on a few pearls.

You started playing aged for but were self-taught for a long time. What kind of impact did that have on your playing?

“I never took a lesson until I was in my 20s and that was to learn to read. My father was a drummer so we had drums in the house since I can remember and he had a great jazz record collection.

"I played naturally at four years old and he took me to sit in with his friends in local jazz bands. Most all of my drumming experience took place on the bandstand which has benefited me greatly to this day.

"I had natural hands so I never had to work hard at the chop thing I just seemed to know how guys were doing things even at a very young age.”

Who were your earliest drum heroes?

“Gene Krupa, Buddy Rich, Zutty Singleton and Lionel Hampton were my first heroes. I learned the tap dancing drum style from them that really swing.

"When I was about nine my dad brought home and Art Blakey records and everything changed. That record led me to Bird, Diz, Trane, Max, Philly Joe and all the rest.

"It was all about swinging hard.”

How did you go about finding your own playing style and technique?

“In those days when I was young you could tell who it was playing by how they tuned their drums and how they swung and how their hands moved.

"Their sound and feel! I never transcribed anything, I would get the records I liked then go hear the artist live and talk to them and listen to everything they did. I would fashion my ideas and groove together by approximating what I thought they were doing.

"I had quite a few favourites and I would take a bit here and there then make it work for my personal needs and my style grew out of that and a hell of a lot of playing experience.”

You have had a long, successful career - what has been the key to that?

“For me the key to a long career is keep learning and working on your craft. Improve constantly and set goals for yourself and make them happen.

"You need to make the music feel good the drum solo is fun but not as important as the music. Become a master of the bandstand and the playing experience.”

How much of drumming talent is innate and how much comes from hard work and practise?

“I was born with a drumming talent and I know may others who were also. Even then it requires hard work to move past when you can do naturally and you don't want to fall into depending and relying on what you can already do.

"Lastly it is a mix of the two work, learning and what you have naturally however I have seen guys who really didn't seem to "have it" work very hard and turn into really good drummers.”

What is the best piece of advice you could give to a young drummer?

“Get all the experience you can playing with live humans. The practice room is great but playing with a band tells you what you need to know.”