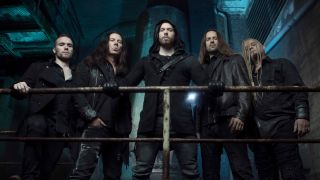 This year’s 12th full-length from Floridian metallers Kamelot, titled The Shadow Theory, is every bit as grandiose as fans could hope - blending distorted guitars, pounding drums and orchestral scores into one majestic wall of noise.

Founding guitarist Thomas Youngblood is the kind of player that can do it all, his formidable alternate picking runs, sweeped arpeggios and smooth legato igniting leads that are both musical and memorable instead of being excessive and misplaced - as can often be the case with the more technically enlightened among us.

Here, he talks MusicRadar through the influences at play and sounds heard on their latest opus, as well as his unique approach to writing songs that seamlessly cover a lot of musical ground…

“Oh yeah, definitely. I mean I grew up on more classical and European styles of music, even new-age music. I loved the British bands like Priest and Maiden, then I got into Michael Schenker who is German and Yngwie Malmsteen who is Swedish. There was so much diversity in my home growing up, but it never gravitated towards any blues-based stuff.

“Even today, I still cringe at certain types of blues. Occasionally I’ll use a blue note in Kamelot, but it’s really rare! Though I think Joe Bonamassa is amazing, of course. It’s amazing seeing how his career skyrocketed. I remember watching a documentary on him when he was just a little kid… it’s almost as if he already knew exactly what he was going to do.”

Your only performance last year on home soil was supporting Iron Maiden. What do you remember about it?

“It was our fourth time playing with Maiden, which is always fun - we were doing a show in California to 30,000 people! Some people were saying, ‘You don’t wanna open up for Maiden, their fans are brutal!’ But I said, ‘Nah dude, trust me, we’ll be fine!’

“Maiden fans are awesome. We’ve heard stories about them not being as into some other bands, but it’s always been cool with us. As a kid, I was a big Maiden fan so getting to share the stage with them is incredible.

“We met up with them in catering area; Steve Harris is always really nice. It’s cool to walk around the stage before they play - I like seeing all the staging, talking to the guitar techs. It’s cool to see a band operating on that level. We’ve seen Kamelot grow a lot to a certain degree… but not Maiden’s level; that’s what I find inspiring - to see what could happen if you work really hard.”

“We fit under different genres. Power metal is one, but there’s also progressive metal, symphonic metal, maybe even a bit of rock… we’re a mixture of all of those things. I wouldn’t exactly say we’re a power metal band. As for my approach, even though the guys I loved like Malmsteen or Schenker who were solo guys, I also like Brian May - who played for the song.

“I grew up in the Shrapnel metal scene when every week there was a new guy coming out shredding and I kept wondering where the actual songs were. That’s why I focused on being a songwriter first. The new album has more solos than usual, but my approach has always been writing what’s best for the song, not showing off. I’ve always been into tight riffing. If you’re tight at riffing and rhythm, you can apply it to soloing.”

Burns To Embrace from the new album is a track that has a lot of interesting harmonic minor runs, while Amnesiac had some really unusual major tonalities…

“When it comes to scales, harmonic minor is an incredibly popular for our music. As are the Phrygian scales, natural minor, Dorian… they all go into my style of playing; it depends on the chords we are playing over. I guess my sweet spot is the harmonic minor, haha! And I agree, Amnesia is a song crosses over from our normal sound to something a bit more radio, in a way.

“It’s fun to mess around with different approaches. I like so many different styles of music - it’s good to incorporate as many elements as I can.

“It all came from learning and practising… music kinda saved me. As a young kid, I lost my father at 12. I didn’t really have a mother figure, so I got lost inside music. I found heavy metal, bands like Scorpions, UFO etc. and disappeared into that world. Metal paints more of a fantasy picture for people than, say, pop music, for example. It takes you on a journey.”

What were your biggest breakthroughs in terms of writing the music?

“On the first few albums, I had no idea what the hell I was doing when it came to songwriting. I didn’t understand the structure of a good song. Now we think in terms of verse, bridge, chorus, middle-eights, outros… all these different aspects of what a normal song should be. I didn’t understand that back then - the first three albums leave you wondering when the chorus is coming, haha!

“Now I understand there are certain psychological things about writing a song that makes sense - but it doesn’t mean you have to do that. As for adding certain notes into my songwriting, I also learned to listen to our singer. He might want to mess around with major scales over our framework. I try to find the right melodies but don’t over-analyse it too much. It’s more fun to play around and change certain chords to major, and a lot of it is just trial and error.”

What are the biggest obstacles you’ve faced as a guitarist?

“Around our third album, I broke my right finger - well, I didn’t break it completely, but I needed a bone graft on my pinky. The whole lower part of my finger was redone and my picking style had to change. I can’t bend my pinky any more, before I could make a fist with the pick. I had to get surgery on my finger and knew it would change the way I played.

“In the beginning, I studied Paul Gilbert a lot on one of his VHS tapes. He is unbelievable - that alternate picking up and down is something else. But I had to relearn it all in the end. We have a new song called Ravenlight that is tricky and awkward, so in order to play it tight, I found it better starting on an upstroke. There are little tricks like that which help with certain things.”

You’ve been using ESP guitars for a long time. Is that what we’re hearing on the album?

“That’s all you hear on our new album… they’re the best. Actually, just yesterday I got a brand-new custom, which I will be opening later today. I’ve been with them for about 10 years. I met the guys in Japan and have had a great relationship ever since.

“Initially, I used Horizons with the Floyd Rose, then I started getting more into the Les Paul-shaped Eclipse - which now account for most of my guitars, fitted with EMG 81/85 pickups. It was a little bit of shock at first because of the gain, but I started dialling in less on the amp and it just sounds perfect for me.

“Some people can’t stand them, but it’s also about how you set up your distortion. You get a lot of gain just from the pickup. My new guitar has the different casings, but still the same pickup. There are custom models on my walls that I wouldn’t dare take on tour because they’re so nice…”

You used Ampeg VH140C solid-state heads before switching to a Kemper Profiler for your live shows. Did you get the amps back out for the recordings?

“I’m using just the Kemper now, the powered version going into a cab - so I cloned all my amps. I used my Ampeg profiled, mixed with a bit of 5150. Right now, the actual amp is sat in storage and collecting dust because I’m really loving the Kemper. It’s weird because I used that Ampeg for years… I had tried the Fractal and Line 6 stuff, but so far the Kemper has the most natural feel out of the digital amps.”

You’ve never really used much in the way of effects… It doesn’t sound like there have been any changes there.

“I like to keep it simple. Before, I used to have my Ampeg - no extra distortion - just a delay, tuner and wah. I don’t need a whole bunch of crap to do a show, and the Kemper is pretty simple to set up. You can dial it all in with relative ease and now I don’t have to worry about having the right amp if we’re doing festivals.

“It’s all about convenience for those fly-in shows. That’s the cool thing about this digital age for guitar players: there’s the convenience of technology. Also, we have five tunings on the new album. It’s cool to use the pitch adjuster in the Kemper and change it for the song than have to bring out four or five guitars!”

The Shadow Theory is out on 6 April via Napalm Records.