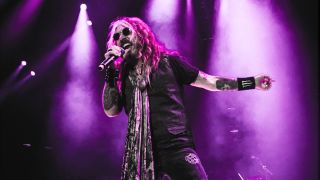 “Pretty much every record I’ve ever done I can go back and listen to them and be proud,” John Corabi tells MusicRadar. “I’m proud of everything I’ve done.”

And not without good reason. The former Mötley Crüe, Union and Scream frontman has made plenty of killer albums in his time. The latest is Live And Louder the, as its name suggests, live CD/DVD from his current band, The Dead Daisies.

Corabi joined the rock supergroup (which also features Doug Aldrich, David Lowy, Marco Mendoza and Brian Tichy) in 2015, and since then they’ve got down to some serious business. They’ve put out two studio records, for starters. Add in world tours, a handful of line-up changes and Live And Louder and you can see they barely stop to take a breath.

Thankfully for us, Corabi did take a little time out in the run-up to the record’s release… to complete a day of press interviews. No rest for the wicked and all that...

Where did the idea to put out a live album come from?

“Since I’ve been in the band, we’ve done two studio albums. Prior to me joining, the band had done their first album and an EP. But to be honest, a lot of people would come up to us and say they loved the record but we are so much better live. That put a bug in our ear: fans were asking about a live album.”

There have been some line-up changes in the band with Doug Aldrich coming in and Richard Fortus and Dizzy Reed leaving. Did that have a big impact on the band?

“The line-up on this album is going to be the live up. David Lowy is the founder of the band and I think he has always wanted a set line-up. It just took a little time.”

How did you come to first join the band?

“I was touring with my solo band in America. We were doing shows tying in with the 20th anniversary of the Mötley Crüe album. I was literally pulling into my driveway when my phone rang and it was Marco. He told me they were looking for a singer.

“I’ve got to be honest, at first… it’s not that I wasn’t interested, but I wasn’t expecting anything. I flew out to LA and met David and Richard and the rest of the guys who I already knew. I wanted to see if I could make it work, and it’s been crazy ever since.”

Did you go straight into writing for what would become Revolución?

“I got the call from them at the end of January. I came home from meeting them, went back out on the road with my solo band to do some shows in Canada, I flew down to Miami, I did a couple of shows with the Daisies in Cuba in February, and then they asked me if I wanted to do a record.

“Next thing I knew I was on a plane to Australia. We started the record in Sydney on March 10 and we were done on April 10. They had three songs they had already started and we wrote 14 more. We wrote, recorded, mixed and mastered the record in 30 days.

“The first Zeppelin record was done in 24 hours, so we haven’t broken any land and speed records but we don’t believe in overthinking things. We don’t get pissed off with a song for three weeks. We go with our first reaction, lay it down and move on.”

You mentioned playing the 1994 Mötley Crüe album with your solo band. How do you look back on that record today?

“I’ll read things every now and then, some video will pop up and I’ll read the comments and a large percentage of the people are positive about that album. But then there are some people who say that it sucks and it will never be Mötley Crüe and that Vince is the best singer. It is what it is. Beauty is in the eye of the beholder.

Did you immediately gel with the rest of the band when joining Mötley?

“The bands that do well don’t get caught up in fads; they are just true to themselves. There was no discussion on us having to do something heavy and dark and different. They called me and told me Vince was out and asked me to come to rehearsal. Nikki and Tommy had the Scream album and asked me to come by.

“The one dynamic that really helped change the sound was the fact that I did the audition, they asked me back and then we were going to leave and I wasn’t sure if I would get the gig. I just grabbed a guitar and we started jamming blues. They were like, ‘Shit, dude, you can play guitar.’ We started jamming and I think that first night we had pretty much 80 per cent of the song Hammered written. By the end of the week we had Hammered, we had started on Misunderstood. It was coming together easy. We were just four dudes jamming on riffs.”

How did working with Mötley compare with other bands that you have worked with?

“With Mötley, I was very surprised that as strong as Mick, Tommy and definitely Nikki’s personalities were, the one rule that we had was that regardless of whether, for example, Tommy came up with an idea and someone else thought it was stupid, it didn’t matter. We still tried that idea and everybody gave it their all. I was blown away by that: nobody said they didn’t want to try something.”

That record became a fan favourite but didn’t do as well commercially. Why was that?

“Honestly, our failure on that record was that it was a perfect storm of a lot of different things. Obviously if you look at the history of the music industry, there was Nirvana, Soundgarden, Pearl Jam, all of these anti-'80s bands, all anti-big hair and glam. That was going on; the grunge movement was tearing down everybody.

“The worst thing, though, was that Tommy, Mick and Nikki couldn’t keep their mouths shut when it came time to take a pot shot at Vince. They couldn’t do it. They kept saying how much better the band was now with an actual singer and songwriter, they would talk about Vince’s weight, about Vince’s personality. That drew a line in the sand with the fans and made them choose what side of the fence they were sitting on.

“Plus, there was a big shake-up with Elektra Records. A lot of people were fired, like 60 people. After the record came out, I don’t think I saw anybody from the record label for the entire five years that I was in the band. Anything that could possibly go wrong went wrong.”

After leaving Mötley, you formed Union with KISS guitarist Bruce Kulick. Was that exactly what you needed at the time?

“That first Union record was very therapeutic for Bruce and myself. The problem with that band, as great as it was, we could not make a dent… we were doing great with ticket sales, but we weren’t doing shit with album sales, and at that time you made your money through publishing. We couldn’t even get arrested.”

“I joined the band, we went to Cuba, wrote and recorded [2015 album] Revolución, we went on tour, Richard [Fortus] and Dizzy [Reed] left to go back to Guns N’ Roses, we got a new guitar player [Doug Aldrich] and then we went and recorded a new record.

“We did two records, a world tour and changed members. Our label wanted a live record from us, and normally we would have gone in around January to work on a new studio album, so I think they are just giving us a little time to gather our thoughts before writing a new record. We’re scheduled to start on that towards the end of this year. This band is always non-stop. Even when we are stopped, none of the members stop.”

Live And Louder is out now.