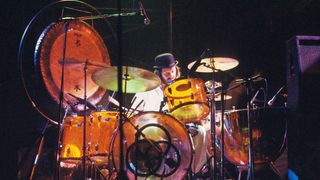 There are few drummers who have had so many words written about them than John Bonham, but for good reason.

Bonham quite simply created the mould for every rock drummer since. Led Zeppelin formed in 1968 initially as the New Yardbirds, with guitarist Jimmy Page hooking up with Band Of Joy vocalist and drummer Robert Plant and John Bonham, quickly followed by John Paul Jones joining on bass - playing their first gig as Led Zeppelin in October 1968.

Their self-titled debut followed in 1969 and hit the ground running: ‘Good Times Bad Times’, ‘Communication Breakdown’, ‘Dazed And Confused’… band and drummer really were the whole package from the start.

When British rock drumming ruled the world: it was 50 years ago today...

There are so many wonderful drumming moments throughout Led Zeppelin’s discography, which at the time of those albums’ release must have had drummers listening in awe. And their power to astound is undiminished, 50 years on from the band’s formation.

John’s enviable feel and placement of notes combined with his intangible sense of musicality helped create some of the best-known grooves and fills in rock. And his approach was refreshingly unique back then, a sense of space and restraint combined with power and speed when necessary, delivered with a touch that offered up subtle ghost notes and drags in conjunction with an unfaltering backbeat and ferocious kick-drum foot.

One key component of Bonham’s vocabulary was the use of hand/foot triplets - a single note played with each hand and the bass drum consecutively.

For most right-handed drummers this would be played right-left-foot - however Bonham would often play this figure leading with the left, ie: left-right-foot. The main advantage of playing it this way around is that the floor tom is featured more, giving the figure a heavier, deeper sound.

Another triplet figure for which Bonham is known is played on the bass drum, and can be heard to fantastic effect on ‘Good Times Bad Times’ (but check it out also on ‘When The Levee Breaks’ and ‘Black Dog’). The figure involves playing the last two partials of the triplet on the bass drum to create a sound that’s illusory, with the ear tending to think that all three partials of the triplet have been played.

On ‘Rock And Roll’ and the pacier bit of ‘Stairway To Heaven’, Bonham used a combination that could be regarded either as a herta with the bass drum replacing the last note, or three-stroke ruff with an additional note played on the bass drum. Either way the first three notes are played snare, rack, floor but the figure itself is also played moving across the beat with a 4-over-3 rhythm.

Bonham would also play this figure phrased using triplets and with a three-beat feel, either as 3/4 or 3/8 depending upon the perspective.  And he invented ‘gospel chops’ too! Bonzo was using crossovers to play triplets - a popular technique with today’s gospel-chops players, before most of those guys were even born. Basically the figure is a right-left-foot triplet with the figure starting on the snare before moving to the toms, where on the third beat they crossover.

One crucial aspect of John’s drumming was his sound, with his kit featuring big drums tuned high: 26", 14", 16" and 18". These larger drums move so much air when hit hard and really convey a sense of power, especially in conjunction with larger, medium-heavy cymbals. Bonzo was a Ludwig enthusiast throughout his entire career.

Bonham had begun playing a four-piece Sparkle Green Super Classic in his early bands including Band Of Joy, a kit that had been the standard rock drum kit in Britain ever since Ringo Starr had swapped to Ludwig in 1963. After a dalliance with a more conservative-looking maple Luddy in 1969, used largely on Led Zep’s second album ‘The Brown Bomber’, Bonzo reverted to green sparkle kits, presumably because it was a bit more in keeping with the showy nature of his playing.