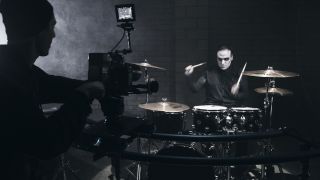 Goth shock-rockers Wednesday 13 would be quite likely to scare your cat if they ever came round for tea.

But, don’t be fooled by the make-up and theatrics, this lot have tunes till Tuesday. Or Wednesday. And behind the chunky riffs and anthemic hooks of tracks like Cadaverous, Prey For Me and What The Night Brings from fab new album Condolences is a man from a rich rock drumming lineage.

Yes, as you may have guessed by the name, Wednesday 13 drummer Kyle Castronovo is the son of rock drumming superstar Deen, and lately it’s his heavy-as-hell grooves, punctuated by furious blast beats and some tidy double-kick work, that really steer the Murderdolls frontman’s shtick on his seventh album under his own moniker. We’re pretty sure we know the answer to our first question, but we ask what it was that first got the young Kyle into drumming.

“Growing up watching my dad play,” he tells us. “I just thought drums were the coolest thing ever from that point on. He introduced me to a lot of great drummers and heavy bands at a young age.”

So obviously there’s your dad, but who else do you count among your drumming heroes?

How did you first come to hook up with Wednesday 13?

“Through a mutual friend, actually. My old band landed a tour opening for him and we just hit it off. Opportunities arose and here I am. It’s still beyond a dream come true to play for him and the guys!”

Which Wednesday 13 song perfectly captures your sound and style?

“Honestly, I would have to say any song on our new album, Condolences. It’s my first record with them, so I feel that it captures my drumming style. I’m beyond proud of how everything turned out on it.”

Does your dad give you much advice, did he teach you drums?

“Absolutely! His advice was, and still is, extremely helpful. I’m very grateful. He did teach me a lot on the kit as well! Although when he’d be out on the road, I did learn some things on my own just by listening to my favourite albums, growing up and playing along, which is actually the same way he learned too as a kid.”

What does Deen think of your drumming with Wednesday 13?

“He’s beyond proud and stoked! He’s full of energy so he’s never afraid to express it! Ha ha! It’s awesome and humbling. He does come to our shows whenever time allows and always my hometown shows, for sure. He’s also a big fan of both Wednesday and Murderdolls, so watching him get stoked at our shows is always a blast for me.”

How do you approach playing live with Wednesday 13?

“Just by playing the way I do, I suppose. I try to add a little of my own flavour to his previous songs, but still staying true to his style. I just give it my all every night. That’s the main thing.”

“Usually guitar. Roman [lead guitar] or Wednesday will come up with a riff and I just put my drumming stamp on it and if they’re happy, I’m happy, ha ha!”

“For us, it’s just focusing on our mission, which is to give it all we’ve got and put on the best show we can for our loyal fanbase.”

“A custom yellow Sonor kit my dad had made for me when I was four years old. Wish I still had it!”

What gear are you using now?

“There have been so many, but besides playing for Wednesday, having my dad guest on a song on the new record - by far the coolest father/son drumming, bonding moment ever! One to remember always!”