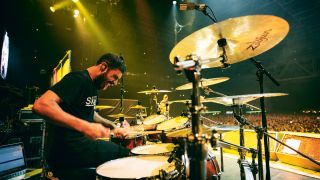 It’s never going to be a bad thing having Iron Maiden as your dad. For ‘next generation of new wave of British heavy metal’ band The Raven Age, the Maiden connection is with guitarist and founding member George ‘son of Steve’ Harris.

But Harris Jr has been supported from the band’s 2009 inception by drummer Jai Patel, who has been able to watch the great Nicko McBrain up close and take his cues from the heavy metal drum legend as The Raven Age supported Maiden on their Book Of Souls tour.

But make no mistake, The Raven Age are undoubtedly metal stars in their own right. Check out Jai’s playing on ‘The Promised Land’ from their debut album Darkness Will Rise to sample Jai’s own very tasty metal chops for yourself.

How did you come to hook up with  The Raven Age?

“Dan [Wright], one of the guitarists, actually found a video of me covering Dark Days by Parkway Drive on YouTube and they just dropped me a message asking me to be part of The Raven Age. It was really quite an honour for me that my YouTube videos caught their eye as I never expected anything like that to happen through putting some videos online!”

You’ve played with some pretty huge metal heroes - what was it like supporting Maiden and what have their fans been like?

“It was the experience of a lifetime. Getting the chance to perform around the world for six months in stadiums and arenas supporting one of the biggest bands around all whilst travelling on their plane Ed Force One was something I never expected to happen at any point in my drumming career. I’ve never even dreamed of doing a tour that big, so the whole thing blew me away! The Maiden fans were brilliant every night and they really got into our set! We didn’t have one bad crowd on the whole tour and sold a lot of merch worldwide so it was a huge success in getting our name out there. We even saw some of our own fans come out to shows to see us, which was crazy!”

What are Iron Maiden like - have you had any pointers from Nicko?

“They are all really down to earth and fun guys. Bruce is especially funny on and offstage too, he cracked me up numerous times! I also had a great time hanging with Nicko and I felt especially lucky getting to watch him play up close for over 70 gigs and talk drums with him. I did ask once or twice for any advice and he just told me to keep doing what I was doing, but I got the most from watching his gig. He’s a monster of a player and as soon as I had the opportunity to stand behind his kit I took it. He’s got such a unique style, feel, and is an extremely powerful player. Even when he’s warming up for his show on his practice kit he plays some outrageous stuff!”

Who were your drumming heroes when you started out playing?

“My favourite band is Avenged Sevenfold and The Rev is my all-time favourite. You can really hear his creativity and skill in albums like Waking The Fallen and City Of Evil where he does some insane things! I remember wanting to be like him when I started drumming and I’d copy all his stage moves when I was jamming their songs badly in my loft! It’s such a shame he’s not around anymore… RIP Jimmy.”

Which The Raven Age song perfectly captures your sound and style?

“Promised Land. It’s got a mix of intricate parts, double bass drum fills and a few linear bits in there too as well as just straight-up groove, which is the basis of my style. I love to have fun doing a bunch of crazy fills and speeding through some double-kick stuff, but I also like just holding back and driving the music with a nice fat groove! It doesn’t really matter what I play, as long as it fits with the music and sounds good I can’t help but enjoy it.”

What gear do you play?

“I have just hooked up with Pearl for drums and hardware, which is a massive step for me. I also play Zildjian cymbals, Vic Firth sticks, Remo heads and Protection Racket cases. I use Read Audio in-ear monitors too.”

“My first kit was a Pearl Export ELX so I really feel honoured to have teamed up with Pearl recently. My dad got it for me when we went to the London Drum Show in 2007 and I’ve still got it at home! I dig it out occasionally, but it reminds me of when I just started playing and wasn’t very good… and all my other kits sound way better anyway!”

“My Pearl Demon Drive Pedals! They are the smoothest pedals I’ve used and as long as I have them I know I‘ll feel comfortable at the kit. My feet don’t agree with any other pedal!”

“It was when I had just started learning drums and I hadn’t practised for my next lesson. My drum teacher told me straight up there is no secret to getting better and I had to practise and put the hours in if I wanted to improve. That’s stuck with me forever and sometimes if I’m having a lazy day it pops into my head and gets me motivated to get on the kit. I love practising and when you keep pushing it and seeing progress there is no better feeling.”

“It’s important to rehearse and rehearse until you can play the songs without thinking and once you’ve got that down the next thing is to work on the visual aspect of your performance. You don’t want to look bored onstage! That negative energy will transfer into the audience and people will lose interest so my advice would be to rehearse just like it’s a gig over and over again and get your show down to the smallest detail. If you and your bandmates are nailing the songs, looking the part onstage and getting into the show you can be sure your band has made a big impression. You never know who’s in the audience!”