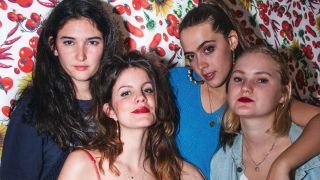 All-female four-piece Hinds have stormed out of their native Madrid with an energetic lo-fi garage rock sound driven by the taut beats of drummer Amber Grimbergen.

Rowdy and well-received sets at Coachella and Glastonbury have boosted their profile all around the world as Amber and co continue to make being in a band seem like unquestionably the best fun possible.

New album I Don’t Run displays a growing maturity to their playing but still with a keen sense of joyous pop on the arresting New For You, Soberland and I Feel Cold But I Feel More.

“When I was 10 or 11 years old, my parents owned a restaurant and I spent all the weekends there. It was fun because all the workers were my sisters’ friends that were like 17, 18 years old and the vibe was awesome.

"One of the chefs was always cooking with headphones on and singing out loud, one day I asked him what he was listening to and he handed me his iPod; it was Whatever People Say I Am… by the Arctic Monkeys and I freaked out! It was my first contact with contemporary rock and I loved it so much!

"My sister’s house had a rehearsal place in the basement with a drum kit, and one day I sneaked in, obsessed with that band, and the first thing I saw was the kit, so I just started hitting it, and later my sister’s boyfriend taught me how to play.”

Which Hinds song perfectly captures your sound and style?

“I think the entire new album does, I couldn’t pick just a song. I felt more confident writing the drums for this record and I think I finally found a style I’m comfortable with.

"I didn’t take a lot of classes, I mostly learnt how to play by teaching myself, and I think that helped me to have an open mind about what is ‘right’ and what’s not.”

“I feel so proud just with the fact I am in a band that’s able to tour and to travel all around, it’s a crazy thought. I grew up in a little town and there were a lot of bands, but no one ever dreamed about touring… so I am very grateful for this, but I am the proudest when I listen to our records! Recording in a studio and sharing all that music is the best achievement and feeling.”

Best drumming advice you have been given?

“I went to a group music class for four years in high school, a bunch of kids with instruments playing covers and playing them in front of our parents twice a year in a theatre.

"We had this amazing teacher, called Mika Selander, who kept on saying, ‘How do we listen? Half-ear for you, the rest for the rest,’ and I wouldn’t have been able to play in a band without that sentence.”

“I am very proud of my drum kit! I bought my first one when I was 13. It was a cheap second-hand one and honestly, it was s**t and ugly, but it worked for me at that time… Last year I finally got myself a good one, a beautiful Gretsch Catalina Maple and it’s sparkling blue. I use Paiste for the hi-hats, Turkish for crash and Zildjian for ride.

"The element I am most proud of is my pink sticks! I saw pink sticks for the first time in a Guitar Center in California and I fell in love, but they are impossible to find, so I had to order them online and I got like 24 pairs at once a few months ago!”

How do you approach playing live with Hinds?

“A beer before a show, and some during, always helps! Beer makes me feel more comfortable on stage. We want to make people dance and we want them to feel as free as us, with maybe some mosh pits!”

Do you play any other instruments?

“I don’t. Both of my parents are baroque musicians, and before playing drums, I tried it all! My dad tried to teach me oboe and I hated it, then I played violin for three years, and I hated it; I played piano for two years, and I regret quitting, but my teacher sucked!

"I’ve tried guitar but strings are super hard for me… though one day at the studio Ade and me switched instruments and jammed.”

“My ride cymbal, it’s a 20” Zildjian A Custom. It’s super thick and heavy, but it’s the only ride cymbal I like when I hit it hard and soft, others just annoy me, haha!”

“A good warm-up. Usually we bring a mini speaker to play songs backstage before a show, and the best warm-up is some cheer-up songs and beer.

"My favourite picks are ‘Unwritten’ by Natasha Bedingfield, ‘Hips Don’t Lie’ by Shakira and ‘Blow Your Mind’ by Dua Lipa…”