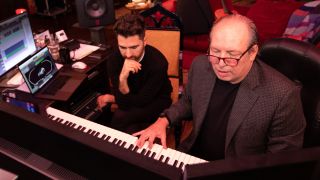 He’s known for his blockbuster movie soundtracks, but Hans Zimmer’s latest project sees him swapping the big screen for the open road. It’s been announced that he’s composed the sounds for the new BMW Vision M Next electric concept car, which launches today.

One side effect of the move to electric cars is that drivers will no longer be able to enjoy the roar of an engine as they put their foot to the floor, so the market for substitute sounds is likely to be huge. There’s also the question of safety: other road users need to be able to hear an electric car coming.

BMW has enlisted Zimmer to help create BMW IconicSounds Electric, which is debuting today but will also be used in future electrified vehicles from the company.

“I have always been a BMW enthusiast,” says Zimmer. “As a kid I used to recognise my mother coming home by the sound of her BMW. I am thrilled to get the chance to design the sound of future electric BMW’s and create emotion for the future electric driving experience.”

Discussing how the sounds change the in-car experience, Zimmer says: “When the driver interacts with the accelerator pedal it is not only a mechanical touchpoint but also a performative element. Accelerating becomes an experience during which the driver moves through a series of gradually morphing sound textures.”

BMW says that the sound of the Vision M Next is designed to “create harmony between the driver and the electrically driven vehicle”. Zimmer worked on the project with Renzo Vitale, acoustic engineer and sound designer at the BMW Group.