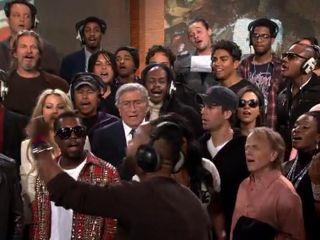 What's better, the new version or the original?

Okay, so the new version of We Are The World is upon us, this time renamed We Are The World 25 For Haiti. Like the original, which was recorded to aid famine victims in Africa, the cause is timely and admirable: to raise funds for the earthquake-ravaged country of Haiti.

Although the framework of the 1985 composition, written by Michael Jackson (who appears in portions taken from the original video) Lionel Richie and that track's producer, Quincy Jones, remains mostly intact, the talent assembled for the remake differs wildly from the gang who gathered together a quarter century ago.

Back in the day there was - in addition to Messrs Jackson and Richie - Bruce Springsteen, Bob Dylan, Dianna Ross, Ray Charles, Stevie Wonder, Cyndi Lauper, Steve Perry, Dionne Warwick, Tina Turner and Willie Nelson, among others. Strong voices? You betcha!

...stack up against the original?