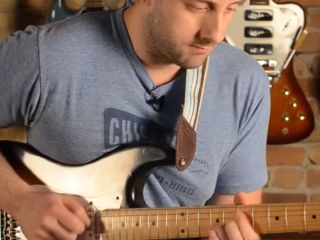 Alex Chadwick mixes Chet Atkins, Buddy Holly, Rush, Rage Against The Machine and many, many more in a dazzling video display

OK, how many guitar riffs could you play in a single take? If your answer is more than 100, then you might film yourself as proof. That could be the only way to beat the accomplishment of guitarist Alex Chadwick, who recently performed 100 famous guitar riffs, chronologically, in one take.

Chadwick, a sales manager at the Chicago Music Exchange, hatched the idea with the store's owner, David Kalt. The two put together a setlist, reviewing Billboard charts from 1953 to 2011, that would be, in Chadwick's words, "a brief history of rock 'n' roll."

Chadwick isn't sure how many takes were required for him to perform his impressive 100-riff performance. "It might have been three or four," he says. "We took an afternoon to shoot it. There were a few mistakes - I knocked a slide off an amp or something like that - but before you knew it, I had it down. There it was!"

A Fender '57 Tweed Deluxe Reissue was Chadwick's amp of choice, and as for the guitar itself, he went for a '58 Strat. "I'm a Strat guy," he says. "It's pretty amazing how many sounds you can get on it."

Now that he's gaining YouTube fame for nailing 100 guitar riffs in one take, the obvious question, of course, is: What about 200 riffs? "We've actually talked about it," Chadwick says with a laugh. "But I'm going to give myself a break for a while. Playing 100 riffs is way harder than you might think."