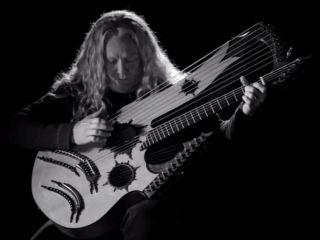 Who are those guitarists? Just one, actually - it's Keith Medley on his homemade 27-string model

You say your second (or third) guitarist is bugging you? No problem! All you have to do is follow the lead of Keith Medley, a Tennessee-based musician, luthier and virtual one-man band, who designed and built his own 27-string guitar.

Why 27 strings, you ask? According to Medley, he was simply following his muse. "Building this guitar turned out to be the easy part," he explains. "The hard part has been learning to play it. Through two years of bittersweet struggle between myself and these 27 strings, I determined it would not defeat me but would play the music I heard in my heart."

Medley says that he always had the idea for the guitar in the back of his mind, but he had to put off making it for more than three decades in order to focus on family life. But get this: Medley's got a new challenge. He's going to build a guitar with 34 strings.

All of which sounds great. But perhaps he sound aim a little higher. Witness the video below of Pat Metheny playing a Pikasso 42-string guitar!