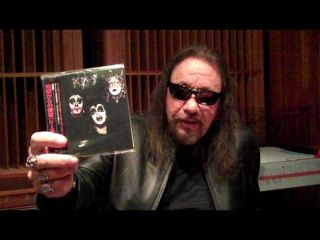 Who is that Spaceman behind those spades?

During the '70s and early '80s, KISS lead guitarist Ace Frehley was considered the ultimate rock god. Don't think so? Let's run down the essential criteria...

And hey, why not stick a smoke bomb in your Les Paul Custom while you're at it? Now you've got a real rock show!

"We were cartoon characters, superheros" Frehley admits, seated in a studio at New York City's Gibson Guitars Showroom. "But we made good records, too. We had to back up the antics with the tunes."

Frehley penned a few of those numbers himself (Cold Gin, Shock Me - the latter was his first lead vocal), and he was the only KISS member to score a bona fide hit with the song New York Groove from his 1978 solo album, one of four such discs issued by each member at the time.

"It probably surprised some guys in the group when I had a hit," Frehley says. "But at the time, everything helped feed the KISS machine."

With a brand-new solo album, Anamoly, due next month, Ace Frehley took the time to wax nostalgic in the above video on his 6 career defining records. He even turned up with some genuine articles from back in the day: framed vinyl, 8-track tapes, cassettes. "I have all this stuff sitting around the house," he says. "At least now I get a chance to show it off."