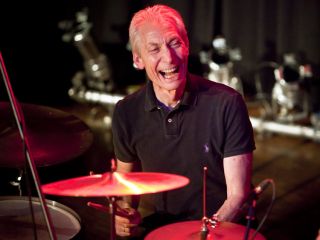 Charlie Watts' drumming on the classic Rolling Stones album Exile On Main St influenced players all over the world. And now the legendary sticksman is talking about his heroes behind the kit.

According to Watts, who has always maintained a 'less is more' philosophy (he sometimes eschews the hi-hat altogether if he doesn't feel the need to play it), going to jazz clubs in London during his teenage years were crucial to his development as a blues and rock 'n' roll musician.

"I was watching them because a) I liked jazz, and b) I went to see jazz players play, and I learned to play from watching television and that. And in those days, as they say, we didn't have DVDs and that, so you couldn't watch Elvis - I never saw DJ Fontana [Elvis' drummer] until I met him. I never saw him play. So the guys I saw were Phil Seaman, London-based people: Tony Kinsey, Allan Ganley."

Watts became a fixture at a London spot called The Flamingo, "which was a club in Soho, an all-nighter - I was about sixteen - and they used to have Phil Seaman on before, and nearly always it would be Georgie Fame.

Watts said that Reed was the first drummer he ever saw who could play rock 'n' roll "properly. He used to play like black rhythm and blues players, so I used to love watching him play. He had a great sound."

Asked to describe his own style, Watts said modestly: "My style? I didn't know I had one. Well, I just emulated all the people I liked."