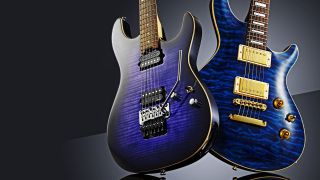 It's been a few months now since ESP announced the restructuring of the ranges it produces. To recap, they now provide what product manager Eric Oppenheimer describes as "five tiers of product lines": the Japanese-made Custom Shop, ESP Original and E-II, the USA-made ESP USA (available only in the USA), plus the offshore LTD range.

Not every guitar company is as careful to differentiate between its different levels and costs/quality of manufacturing, preferring to blanket brand start-up and much higher quality instruments in the same way.

Previously, of course, ESP had its Japanese-made Standard range and it's essentially this that has morphed into the E-II range.

"E-IIs are built at the same ESP factory under the same facilities in the same quality level with previous ESP Standard products," explains Makoto Suzuki from ESP Japan.

But, "it was important to differentiate between ESP's Custom Shop/Original Series and the mass production line, which was ESP Standard," adds ESP USA's Todd Binder.

"E-II was born to represent the next generation of ESP mass production and the [sole] ESP brand was retained for Custom Shop and Original Series, keeping the ESP brand elevated in the premium range it was intended for."

"While some ESP Standard models were rebranded as E-II, many of the models in the E-II line are new designs modelled after the ESP Original series," continues Eric, and that is where the new ESP E-II Mystique fits in.

"It was designed by our master luthier, Shinichiro Kobayashi," says Makoto. "Our Horizon has been a flagship model for ESP for a long time, with an image of 'heavy metal'. His main concept was to create another flagship model, but based on a more traditional style for a wider range of music styles."

It's a good example of the differences between the E-II level and the more expensive Original series. Our recently reviewed E-II Mystique costs £1,699, while the Original version is over twice the price, at £3,749.

"For example," adds Todd, "the E-II Mystique has a veneer for the figured top, while an ESP Original Mystique has a full thickness carved figured maple top. For the observant player, there will be noticeable differences in the details of craftsmanship. ESP Originals have an extremely high level of attention to detail for every process."

A seemingly unusual feature of the Mystique design is that despite being a mahogany/maple dual humbucker 'Gibson/PRS' style guitar it uses the longer 'Fender' scale length.

"We wanted to make the Mystique sound more aggressive and tight by featuring a longer scale," concludes Makoto.

"And another thing we considered was the not-small percentage of bands/ players who use drop tunings these days - a longer scale should be a better fit for both those things."

Read our full reviews of two new ESP E-II guitars on the links below...