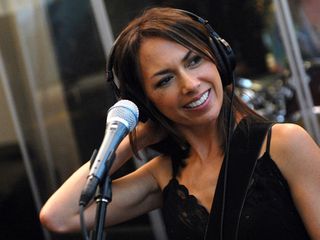 "I've always been astounded at Paul McCartney's natural abilities as a songwriter," says The Bangles' Susanna Hoffs. "Melodies just tumble out of him - they always have. He never overthought the music - at least, that's the impression I get. To go from the words 'scrambled eggs' and have them become Yesterday is pretty incredible. If there was a process to that, it's one that's unique to Paul alone. Nobody else could have done that."

One doesn't have to search to hard to find the enormous impact of Paul McCartney (and, of course, The Beatles) on Susanna Hoffs, both in her work with The Bangles and her solo career. It's there in the chiming guitars, the supple melodies and the shimmering, soaring three-part vocal harmonies. To celebrate Macca's 70th birthday (18 June), we sat down with Hoffs to discuss the man she fell in love with as a young girl in the swirl of Beatlemania, and grew to admire and draw inspiration from throughout her own rich musical journey.

Like millions of others, your introduction to Paul McCartney was undoubtedly through The Beatles.

"Oh, absolutely. As it turned out, my mother had a friend who worked at Capitol Records, and so we got a lot of records that way. One day in 1964, when I was five years old, my mom brought home a copy of Meet The Beatles. I have two brothers - one older and one younger - and on the first listen, we fell in love with The Beatles. Meet The Beatles was on heavy rotation on our turntable for a long time. I associate my entire childhood with Beatles records.

"Of course, my brothers did that whole thing of pretending to be Beatles - you grab a hairbrush and sing into it like a microphone. Funnily enough, I always wanted to be Paul. He was the one I identified with. It's hard to say why; when you're that young, things just hit you and you don't intellectualize them."

A lot of parents in the '60s fought the influence of The Beatles on their kids. Yet your mom gave you the records.

"That was pretty cool. My parents were kind of like beatniks in the '50s - intellectual beatniks. My dad had a really extensive collection of jazz records, and my mom was more into pop. She was always playing the radio in the car and in the house. She loved The Beatles, so it worked out well for my brothers and me. That was a pretty incredible time. The imprint that hearing that music leaves on you - most of the music I've ever wanted to make has been inspired by The Beatles."

McCartney on location in 1965. "The Night Before, from Help!, I think that's just one of the sexiest songs ever," says Hoffs. © John Springer Collection/CORBIS

"As a little girl, I was more attracted to the songs and the whole vibe of Paul. [laughs] And you know, it's only natural - as a young girl, I had fantasies about Paul and The Beatles, that kind of swooning, yummy feeling. [laughs] But in high school, I was able to listen to the music in a different way. By that point, there was so much going on musically - disco, folk-rock, progressive rock, heavy metal - but I would go back to The Beatles all the time. They were always such an incredible musical journey I wanted to take. I was already playing guitar and singing, so I was coming at it from a different place; I was really appreciating the artistry."

At what point did you start to discern the distinct differences between Paul and John musically?

"I was a pretty young Beatles fan, but early on I could tell the differences - who did what, who sang what. Plus, I saw the movies, so I had that visual sense. Listening to the records, I was very sensitive to their individual personas and the differences in the timbre of their voices.

"I know a lot of people like to try to categorize John and Paul in broad strokes - this one did more this, the other did more that - but I never went down that road. I really don't think you can pigeonhole them. They both did so many types of songs and their talents were so broad. Paul's catalogue is so vast, as is John's.

"Picking favorite songs is hard because there's literally too many to choose from. I'll Follow The Sun, I'm Looking Through You, Michelle - oh, and The Night Before, from Help!, I think that's just one of the sexiest songs ever.

"She's A Woman was a real favorite of mine. Something about the tone of Paul's voice and his delivery - it's so forceful. And yet, listen to him on Yesterday, where his voice is so bare and open and melancholy. He could get so wound up and fiery, just authentically rocking, and then, just as quickly, he could be light and evocative. In either case, though, he's just as sincere. He's one of the greatest vocalists we've ever had."

Do you have a favorite solo album of Paul's?

"I'd say the first one. I call it the 'cherries record,' because of the bowl of cherries on the cover. It's always on my iPod. What a cool-sounding record. Singalong Junk is brilliant, Maybe I'm Amazed, and That Would Be Something - what a great groove on that song, the way it builds. It's a very special record."

Paul is still out there touring, making records. One would imagine that's pretty inspiring to you.

"Absolutely. And it's great to see that he loves doing it so much. I'm friends with Rusty Anderson, who's been Paul's longtime guitar player, and of course, I go way back with David Kahne, who produced a handful of Paul's records. I've only been able to see him once in concert - for some reason, I'm never in town at the right time - but he's still incredible. Sure, Paul is very inspiring to me as an artist. He brings people together, and his music provides for such memories."

As a society, we tend to gauge our own lives and the passage of time through celebrities. So, Paul McCartney is turning 70. How does that make you feel?

"That 70 is the new 50! [laughs] And 50 is the new 30, and so on. Maybe seeing Paul out there, still doing what he does, will help us to stop putting limits and boundaries on other people. Paul McCartney has mojo! He's always had it and still does. How cool is that?" [laughs]