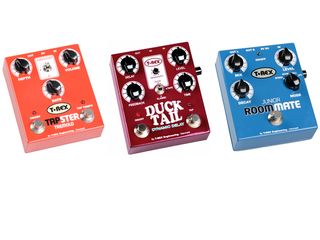 T-Rex's Replica stompbox is a modern classic, now the company is bringing something a bit different to the table with the Duck Tail, a delay pedal with 'ducking' ability.

Ducking means that the delay effect is temporarily reduced whenever it detects a clean signal above a pre-determined level, so essentially the effect only kicks in when you've stopped playing a note or passage.

The most innovative of the three, the Duck Tail is one of the first stompboxes we've seen to use this feature, alongside Strymon's Timeline.

In the name of versatility, T-Rex has also included Tape and Classic delay settings, as well as an Input Gain control for integration into an amp's effects loop and tap tempo.

The Tapster will also feature a 'Subdivision' switch, which will enable players to choose a tremolo pulsation of quarter notes, eighth notes, or eighth-note triplets.

The new Junior Room-Mate will sit between T-Rex's top-of-the-line Room-Mate reverb and their smaller Tonebug unit.

Like its older brother, the Junior will offer four reverbs - Spring, Hall, LFO and Room - but the rest of the controls will be stream-lined to Mix, Decay and Level knobs, stripping out the Hi-Cut option and tube power of the larger Room-Mate.

Like the Duck Tail, the Junior will also include a side-mounted Input Gain control.