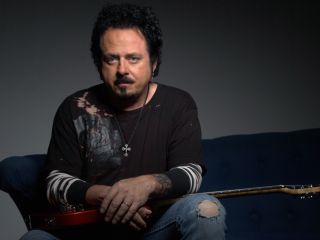 Lukather: Welcome to the camp

By his own admission, Steve Lukather is no guitar teacher. But as a counselor in the next Rock 'N' Roll Fantasy Camp, he isn't worried. "Those who can do can try to teach," he says. "By hook or by crook, I'll have the people jammin'!"

Lukather, a longtime member of Toto and an acclaimed session guitarist whose credits include hundreds of artists (from Alice Cooper to Larry Coryell and everyone in-between) is signed up to make serious rock 'n' rollers out of regular Joes during a five-day session which runs 29 April - 3 May in Hollywood.

"It'll be a riot," says Lukather. "First I'll win 'em over with my stand-up comedy, then I'll hit 'em with some chops. As long as we have fun, that's all that matters."

Camp is in its 22nd year

Now in its 22nd year, the Rock 'N' Roll Fantasy Camp gives everyday music fans a chance to hang out and jam with big-time music stars who act as 'camp counselors.'

"To tell you the truth, I don't know what I'm doing with all of those cats," Lukather says. "Talk about a fucking amazing group of people. Jeez, maybe I should pay to take lessons from them, you know what I'm saying?"

Lukather's humility is admirable, but as he finishes that last sentence, he hits upon the key to the Fantasy Camp's longevity. "That's the thing though: It doesn't matter how much you've done or who you've played with. Do you have the passion? This bunch of cats, they got it. That's all that matters in music. Fun. Is music still fun? If it isn't, what are you doing here?"

And what kind of fun is Lukather looking for at the camp? "Hell, if I can spend an afternoon jammin' on Beatles songs with Elliot Easton, that would make the whole thing worthwhile."