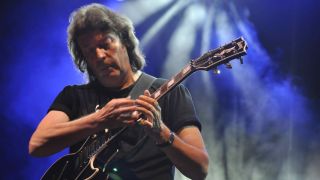 Steve Hackett rose to prominence as the lead guitarist of British prog legends Genesis during the band's vibrant early 70s period, often referred to as the classic, or golden era, of the band. A hugely influential player, he inspired everyone from the likes of Eddie Van Halen (who borrowed his tapping technique) to Brian May (a fan of Steve's multi-part guitar harmonies).

In 1996 Steve returned to his time with Genesis, re-recording a selection of tracks for the album Watcher Of The Skies: Genesis Revisited. Now, sifting through the sands of time once more, he's back with a new double album sequel, Genesis Revisited II (due 22 October), a collection which sees the guitarist (with the help of an all-star prog line-up including Steven Wilson and Mikael Akerfeldt) reinterpret 21 songs - from 20-minute epics (Supper's Ready) to acoustic trademarks (Horizons). We find out the hows and whys...

First up, the obvious question: why revisit Genesis?

“I wanted to do this material again and get the guitar parts right, for a start... To get it in time and in tune was irresistible, but I wanted to restore certain things. For instance, the end of the guitar solo on The Music Box, I originally wrote that as a three-part harmony, but one of the parts got left off in 1971, because we mixed it at about four or five in the morning! So I re-recorded that and, indeed, that third harmony is now in there.”

Why did you choose these particular tracks?

“I went for the songs that I thought were the most haunting from the early 70s Genesis catalogue. It's stuff that's considered seminal material by people such as Steven Wilson of Porcupine Tree, who appears on the album on a couple of tracks... Guitar is key to it, too. I always think Genesis blurred the distinction between what guitars and keyboards were capable of.”

What kind of gear did you use for the sessions?

“I used Pro Tools plug-ins on this album, I used pedals of my own - a Tech21 Sansamp GT2, DigiTech Whammy and a Pete Cornish Ironboost - a Fernandes Sustainer guitar, a little bit of Les Paul, one or two 12-strings. Also an MXR Phaser. I was using them a lot [back then] - Lamb Lies Down On Broadway time was phasers a-go-go. In the early days I used to use two fuzzboxes - a Colorsound Tonebender and a Shaftesbury Duo-Fuzz - in series, which had a lot of harmonic in it.”

Did you add anything new to these songs?

“Yes, I think I saw them in a new light. For instance, I felt Supper's Ready could have done with a bit more guitar on it around the keyboard solo, so I brought some in, like a distant ghostly violin sound. I'd hooked up three fuzzboxes [on Pro Tools] in series to make it really buzzy, but with a lot of reverb with to soothe it. I find it quite riveting - this idea of very quiet, screaming lead guitar. I also used it on this version of Chamber Of 32 Doors, where you get this very empty moment where the vocal's going, 'I need something to believe in, Something to trust' and I've got this screaming guitar, but it's very, very quiet, way off in the reverb and just about audible. That's something that most guitarists don't do. I'm not the first to do it, but it's another colour for guitarists.”

How has your technique changed since your time with Genesis?

“There are many things that I can do now that I couldn't when we were recording these songs originally. The new introduction to The Chamber Of 32 Doors on nylon guitar, for instance, music that sounds like a hybrid between jazz and classical and flamenco and is influenced by the work of Rodrigo - said he, grandly! [In 2008] I did an album, Tribute, that had six pieces of Bach on it. It's quite a workout. Rock guitar is easier: let it be said that no matter how astounding rock guitar sounds, it's much easier to play one powerchord on an electric guitar. It's much harder to get that same emotional impact on an audience with a nylon. To get it up and flying you've got to put in so much more fuel.”