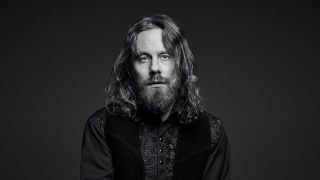 Jeremy started playing back in 1993 as a result of the grunge music scene in general and Nirvana in particular. He'd always had an interest in rock music from an early age, but it seemed somehow detached to him, as many of the bands he liked had already come and gone. Groups like Pearl Jam and Soundgarden, however, seemed more within reach.

"It was kind of exciting. They looked like me and my friends and it seemed like something I could be a part of…"

Who has he listened to?

After having received a Fender Duo-Sonic as a surprise Christmas present, Jeremy first tried his hand at playing the music of the prevailing grunge bands. But it wasn't long before his love of the earlier classic-rock bands like Led Zeppelin and Grand Funk Railroad began to influence his guitar playing.

"I was becoming very influenced by Mark Farner of Grand Funk Railroad and that kind of riff-heavy boogie - you know, blues-influenced rock. I really started to work on and listen to Black Sabbath and Led Zeppelin again…"

What's so great about his playing?

Great feel that echoes rock's glory days. There seems to be an ongoing trend for younger bands to find their musical roots well and truly embedded in classic 70s rock, and Monster Truck is no exception.

Jeremy's guitar playing clearly pays homage to what some would claim to be rock's finest years - in fact, the band initially came into being via longstanding wishful thinking on behalf of Jeremy and the band's singer and bassist, Jon Harvey.

"We spent many years talking about it and not doing it, up until a point where we both had a lot of downtime between our other projects, at which point we asked Steve [Kiely, drummer], who was playing drums in the band I was in at that time, and Brandon [Bliss, keyboards] to join us as well."

Why do you need to hear him?

Listening to Monster Truck, it's easy to trace a timeline back to the days of Marshall stacks, Gibson guitars and leather-jacketed rock attitude. The band formed in 2009 and began to work hard, but the emphasis was always on having fun.

"It was almost selfish, to a certain respect. We really just wanted to play music that was fun for us and we didn't really care too much about how serious we would take it or how much other people would be interested in it - which I think was the secret to our success."

What gear does he use?

As far as amplification is concerned, it has to be Marshall and so the amp of choice for Jeremy is a 1981 JMP, which is fed into two 4x12 Traynor cabinets, loaded with Celestion Vintage 30 speakers. For effects, he runs through a Klon KTR for overdrive, a Jerry Cantrell signature wah pedal, an MXR Phase 90 and a Z.Vex Fuzz Factory 7. His guitar of choice is the Gibson SG, in a slightly unusual colour… "I've got two 2012 TV Yellow Gibson SGs. One of them I like a bit better than the other, and the other one's a backup."

If you missed the band supporting Vista Chino or playing the Download Festival back in 2013, then you might have to wait until this April, when the band will hit our shores once again, playing at London's 100 Club.

Failing that, track down Furiosity or, better still, the recent Sittin' Heavy album for some fulsome, retro-rock goodness. "The idea was that we really wanted to stick with what worked with Furiosity. We really didn't want to deviate too far from the success we had with that record. We thought the best way to do that was to stick to the same game plan."

Monster Truck's latest album, Sittin' Heavy is out now on the Mascot label.