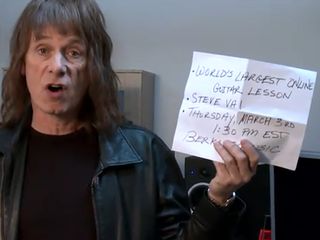 At various times during his career, Steve Vai has been accused of going a tad over the top. So has Spinal Tap's legendary guitarist, Nigel Tufnel, the latter of whom taught the world the importance of 'going to 11.'

Next week, Vai will attempt to do more than go to 11. He's hoping for way more than that when, on Thursday 3 March, at 1:30pm EST (that's 6:30pm GMT), in conjunction with the Berklee College Of Music, he'll try for Guinness Records glory by holding what is described as the 'world's largest online guitar lesson.'

Tufnel, who holds various and sundry records himself (most of which he's uninformed about), is doing his part to promote Vai's event. (Check out the video above.)

"Steve Vai knows too much, frankly," says Tufnel. "To have him teach, free? It's a no-brainer, really. What would you have to lose?"

Vai's free 30-minute online lesson will detail some of his legendary techniques, and focus on how you can develop and expand your own playing. For more information, click here.