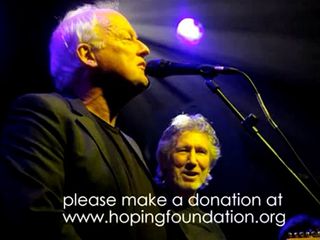 On 10 July 2010, David Gilmour and Roger Waters shared a stage for the first time since 2005's Pink Floyd renunion at Live 8. A benefit event in Oxfordshire saw the former bandmates play a four-song set featuring Pink Floyd classics and a Phil Spector cover.

To Know Him Is To Love Him (A Phil Spector song originally released in 1958 by his band The Teddy Bears, later covered by The Beatles)
Wish You Were Here
Comfortably Numb
Another Brick In The Wall, Part II

The event raised over £350,000 for The Hoping Foundation, a charity that supports and assists young Palestinian refugees. Other acts on the night included Nick Cave and Tom Jones. Check out the rest of Waters and Gilmour's set in the clips below.