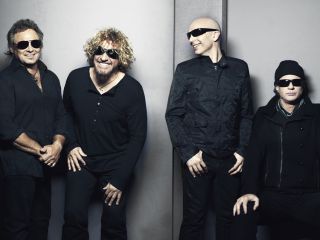 Sammy Hagar knows his guitar players. In the past, he's worked with Eddie Van Halen, Ronnie Montrose and Neal Schon. But in his opinion, Joe Satriani tops them all.

"I've made this statement a million times - some people don't like it, some people do - but Joe is the best guitarist I have ever played with," Hagar said recently.

"That's a strong statement. I realize that," Hagar continued. "You've got to give Eddie [Van Halen] a lot of love for his innovation of what he did as a stylist with the guitar. He broke a lot of ground. But Joe is a master. He can play anything and everything - folk, blues, jazz, hard rock, soft rock, fusion, you name it."

Anybody who's heard MusicRadar's podcast interview with Chickenfoot, the group Hagar has formed with Satriani, Michael Anthony and Chad Smith, knows that the Red Rocker is anything but reserved when it comes to singing its praises. "This is the best goddamn band I've ever been in, bar none," he said.

But Hagar's assessment of Satriani's six-string skills is just as effusive. "As a guitar technician, Joe is the best guy I've ever stood in the same room with on any instrument. And he's so soulful when he solos. He puts more feeling into a solo than any other player I've been with."

Audiences will get a taste of that soul, and of Chickenfoot's brand-new repertoire, when the band hits the road on its sold-out 'road test' of shows starting 14 May in Seattle, Washington and wrapping up 29 May in Philadelphia, Pennsylvania. From there, the group will head to Europe.