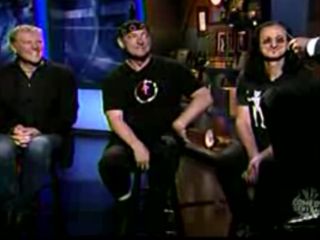 Living in the limelight

Never being ones to wear our their welcome, Rush made their first American television performance in 33 years last night as they sat down for a Q&A and performed their hit Tom Sawyer on the popular Comedy Central show, The Colbert Report.

The band, known for their serious mien and weighty lyrical topics, laughed it up during such questions as "You've been touring for 30 years, do you ever get tired of being so awesome and kicking so much ass?" and "Will my show end up on your tour T-shirt?"

After asking the band whose music influenced them, Colbert deadpanned "You're known for your long songs, have you ever written a song so epic that by the end of the song, you were actually influenced by yourself at the beginning of the song?"

For the rest of the hilarious interview as well as the band's performance of Tom Sawyer, we've got the video.