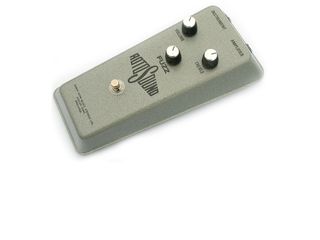 UK manufacturer Rotosound, best known for its guitar strings, has announced plans to reissue its much sought-after Fuzz pedal.

According to the press release, the new Rotosound Vintage Fuzz stompboxes will be produced in firm's UK factory in Sevenoaks, Kent and are set to hit shelves around November/December with an MSRP of £250 or $379.

The company has opted to stay faithful to the original Fuzz in terms of design and key components, equipping it with genuine 60s germanium transistors and a Darlington Pair (a combination of two transistors that, combined, emit higher gain - one for the pub quiz*), but has made a concession to modern technology in the form of true-bypass.

Controls includes Fuzz, Volume and Treble and the new pedal will feature the same pressed-steel box and gloss powder coating as its predecessor.

Based on the much-loved Tonebender circuit, the original Fuzz pedal was produced in a limited run in 1967 and soon found its way on to the pedalboards of some of the era's leading players, including Jimmy Page. However, it never saw mass production.

Nowadays it's thought that there are as few as 10 original Rotosound Fuzz pedals still in existence and this reissue/reinvention was only made possible after a US-based collector contacted the firm in 2010 and kindly sent his prized fuzz back to England for examination.

*Frankly, we hope not.