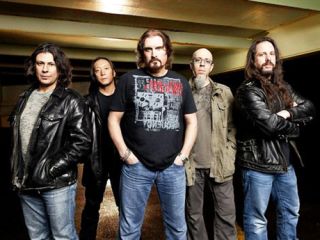 For well over six months, the question has been the same: Who is the new drummer for Dream Theater? That the prog-rock titans were auditioning a handful of the world's top drummers to replace Mike Portnoy, who abruptly left the band he helped to form last September, was one of the worst-kept secrets around. But one unexpected surprise - well, next to the new stickman's identity - is that the courting process, has made for some gripping 'reality TV' in the form of three video episodes released last week on Roadrunner Records' YouTube Channel.

The Spirit Carries On, the three-part drama (and makes no mistake, the series is packed with moments of nail-biting tension), isn't really about finding a new drummer; it's about completing a circle, rebuilding family. When we first encounter the remaining members of Dream Theater (guitarist John Petrucci, bassist John Myung, keyboardist Jordan Rudess and singer James LaBrie) in Episode One, they're crushed, confused and disappointed. "It's heartbreaking," Petrucci says of Portnoy's split. "It's not what we wanted; we never expected this." The band hasn't just lost their drummer; they're without a friend and guiding light.

Quickly, however, they put together an impressive list of candidates to fill the hole left by Portnoy's departure, and in Episode One Mike Mangini, a likeable, energetic powerhouse who has played with Extreme and Annihilator, emerges as a serious contender. "I plan on busting something tomorrow," Mangini says the night before his audition, which turns out to be no idle boast: Through all of the "phases" the band puts him through, he shines, attacking his kit with stunning musical force. By the end of this first webisode, the bar has been set vertiginously high.

In Episode One, Mangini proves his skills six ways from Sunday.

In Episode Two, Derek Roddy (Hate Eternal, Malevolent Creation) knocks everyone out with his blast beats, but he fails to convince the band that he's the missing piece to their puzzle. Virgil Donati (whose credits include stints with John Wetton and The Clash's Mick Jones) and Thomas Lang (Planet X, Steve Vai) score points in various ways that provide keen insight into the inner workings of the group. But it's Marco Minnemann (he's played with Paul Gilbert and Adrian Belew, among others) that truly dazzles. Displaying the same kind of unbridled joy as Mike Mangini, Minnemann unleashes torrents of energy that leaves the band speechless.

Episode Three is the grand finale, the reveal, and within minutes it's pretty clear that Aquiles Priester (Hangar, Vinnie Moore) isn't the man for DT. Peter Wildoer, however, proves to be a last-minute wild card. Just when you thought it was down to the two M&Ms, the dynamic changes.

The decision becomes an agonizing one, and even after Wildoer is written out of the script, the story could go either way. After much deliberation, the call is made to Mangini: he's got the gig. More importantly, he's a member of the family. "Wow, wow, wow!" the overwhelmed drummer cries out.

You can't help but get caught up in it all. If you watched Episode Three last week, that sound you heard wasn't just the loud and rapid thumping of your own heart; it was that of millions of other music fans around the world, all breathing a collective sigh of relief. Face it: they've been waiting to exhale for months. That kind of communal release is bound to make more than just a little noise.

You can catch all three episodes of The Spirit Carries On at Roadrunner Records YouTube Channel.