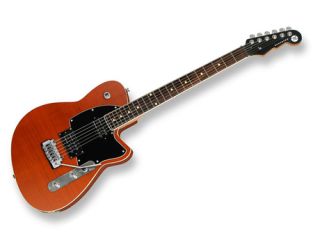 "It's the most fun you can have with your clothes on," says guitarist Reeves Gabrels, ready with a sure-fire advertising tagline for his upcoming signature Reverend Reeves Gabrels guitar. The instrument is an update of his earlier Reverend artist models and will be unveiled at the Dallas International Guitar Festival, which takes place on 20-22 April 2012.

"It's a pretty incredible guitar," Gabrels enthuses. "You'll literally be able to take it off the rack and play a show with it, and you'll know it'll sound great. All of the Reverend guitars I play on stage are totally stock."

The guitarist, known for his work with David Bowie and on numerous band and solo recordings, began his association with Reverend three years ago." I was looking at a few other companies, but Reverend really appealed to me," he says. "I could play their guitars anytime, anywhere and never worry about them. They're beautifully made, but they're also affordable and directed at real players and working musicians. They're not these overpriced wall trophies for doctors and lawyers."

Gabrels says that the new signature model isn't a radical departure from his first two Reverends, but he's pretty jazzed about its pickup configuration - two Joe Naylor Railhammer Chisels. "For years, nobody has addressed the differences in wound and unwound strings as far as pickups go," he says, "so I think the Railhammer is something of a breakthrough. There are three pole pieces for the unwound strings and a bar magnet for the wound strings.

"What I've found with the Railhammer is that the unwound strings sound fatter - you really notice this as you go up the neck - and the wound strings have incredible definition, even if you palm-mute. The pickups are a little on the hot side, but they have a unique tonal quality, and you can really craft their output."

The new model sports a vintage-looking, translucent orange flame on its maple top, and on the korina back and sides it's an orange burst - on older models, the back and sides were black. "I always liked orange," says Gabrels of his color choice. "You know, anytime you design a guitar, you're playing with history. With that in mind, I think the orange alludes a little to Gretsch."

The guitarist also gives high marks to the bass roll-off knob located on the upper bout of the instrument. "It's kind of where you'd find a toggle switch on a Les Paul, and I find that I use it a lot," he says. "With a clean tone, I find I can get a great single-coil sound, and when I dial the bass back up it's like a full-on humbucker. And then there's various shadings in-between that you can get very creative with."

Gabrels is in the process of completing a new solo album, and he insists that his signature Reverend will be all over it. "I'm not one of these guys who just sticks his name on a guitar just for the hell of it," he says. "These guitars say Reeves Gabrels because I really use them."