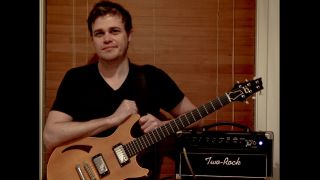 "PBG and its brands are the subject of increasing interest among players in Europe," said Jimmy Lovinggood. "The Road Tour enables them to really get to know and experience the instruments - and it's a treat whenever Adam Miller performs." Miller's most recent album, Delayed, was named among the Top 10 Albums of 2012 by Acoustic Guitar magazine.

PBG makes boutique, masterbuilt guitars and amps more readily accessible than ever before. PBG guitar brands include b3 Guitars by Gene Baker, Fano Guitars, and the Glide series from Koll Guitars. All guitars are built at the PBG guitar workshop in Arroyo Grande, California under the supervision of PBG Chief Master Builder Gene Baker. PBG amp brands include Two-Rock and Tone King. Both brands are built at the Two-Rock workshop in Rohnert Park, California.