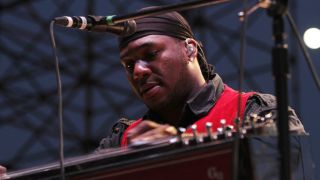 Randolph enjoyed producing his mentors because "it the only time I was able to yell at them and get away with it." (Image credit: Retna Ltd./Corbis)

"This is a story that had to be told," says steel guitar master Robert Randolph. "These are guys I grew up with. They're giants. Problem is, they were in the background, and nobody really knew about them. If I can use my name and the fame I have, I'm going to try to bring their tale to the world, because they're amazing."

The story Randolph is talking about is that of The Slide Brothers - steel guitarists Chuck and Darick Campbell, Calvin Cooke and Aubrey Ghent - and he's brought them together on the new album called, appropriately enough, Robert Randolph Presents The Slide Brothers, a rousing celebration of rock, blues and gospel on which the multi-stringed musicians spin magic.

Randolph's history with The Slide Brothers goes way back to a time before he shared stages with the likes of Eric Clapton and Dave Matthews. As a child, Randolph was raised and trained as a steel guitarist in the House Of God Church in Orange, New Jersey, where the four Slides Brothers and other musicians helped to create to tradition that became known as "sacred steel." As Randolph notes, the music performed at church services, non-secular that it was, was anything but solemn. "It was as loud and rocking as anything you ever heard," he says, laughing. "These guys didn't hold back. When you're that good, you kind of scream it, you know?"

Randolph sat down with MusicRadar to talk about his reverence for The Slide Brothers, how he coaxed them into making a secular album, whether he feels the pedal steel guitar is a misunderstood instrument and what it feels like to be called one of the greatest guitarists of all time.

There's a real musical timeline between you and The Slide Brothers.

"That's right. You had the Campbell brothers who grew up watching Calvin Cooke, and then you have me watching all of them. I wanted to be like these guys. Calvin was really the first rock 'n' roll steel player in our church. When he was younger, he was so dynamic - you wouldn't have believed what you were seeing. So that was my main motivation - the history aspect of The Slide Brothers. They matter. A lot of people revere them, but there's a lot more who have never heard of them at all. That needed to change."

How far back does the music go?

"Far back, man. Everybody from great-grandmothers and on down, all of the Campbells and everybody who have been affiliated with sacred steel, it's an ongoing thing. This style of music was hidden in the church from the '20s through the '50s and so forth. The guys before me could never leave the church and play the music - there'd be ridicule. So I grew up wanting to be like those guys. I looked to them and said, 'All right, I'm going to take what they do, and I'm going to mix in some Hendrix and Stevie Ray Vaughan.

"Arhoolie Records had kind of documented it all in the mid-'90s. We thought it was big attention, you know what I mean? 'Oh, man, we're big!' [Laughs] The church didn't like it at the time, but I was just a young guy. I was still learning. I didn't have the same connection to it like the other guys. They'd been playing in the church for 30, 40, 50 years."

You grew up wanting to be like them, yet you decided to take your music out into the secular world.

"Yeah, some things just happened the way they did. I was younger and got on TV and signed a record deal - that's what happened with me. Calvin Cooke worked for General Motors, the Campbell brothers worked for PSE&G and Con Edison and things like that. But you know, they had that loyalty to the church. The Campbell brothers' father was second in command of the organization. There's real strict rules in the church. It feels weird talking about it, but a lot of it is real petty now. What can you do?" [Laughs]

One of the first times you brought The Slide Brothers out on big-time stages was during the Experience Hendrix tour last year.

"Yeah, I took them out with me, which was great. But a lot of these guys have traveled, especially after sacred steel was documented. They picked up on a lot of international festivals and some smaller things. But I just thought that people should see the connection between us, that the story should be told. That's why I really wanted to make this record."

Do you have to convince the guys to make this record? Any arm-twisting involved?

"I'm still twisting arms! [Laughs] Aubrey Ghent is a minister, and so he still preaches in church. It's a little different for him. It's funny - these guys still don't understand how good they are. People need to hear them. I tell them, 'Let's go, man! This is real. Real radio stations are playing you.' [Laughs] I'll tell you, making this record was great because it was the only time I was able to yell at them and get away with it." [Laughs]

You produced the album with John McDermott, who's been very involved with the Jimi Hendrix catalogue, and Eddie Kramer engineered, mixed and did additional production. Did all of that grow out of you performing on the Experience Hendrix tours?

"That's right. Having Eddie around, it all came together. I was always a Hendrix fan, and I loved Zeppelin, too. Eddie worked with both, so there you go. I thought that having him on this first record would ensure some great guitar tones, to say the least. He had so many cool ways of doing things. I'm one of those guys who doesn't really get into the technical end of miking things, but you just know that Eddie is doing something magical. He's the guy who invented a lot of these sounds."

Did you introduce the guys to a lot of the cover songs on the album? Don't Keep Me Wonderin', for example…

"The Allman Brothers song, sure. They didn't know that one, although Calvin has more of a secular mind, so he knew stuff like The Sky Is Crying and a few others. That's why he did such a great job of singing it. He's an amazing arranger and interpreter. He can tear it up on these cover tunes."

The arrangement of George Harrison's My Sweet Lord is pretty different from the original. It reminds me a little bit of Oh Happy Day.

"Definitely. What a lot of people don't know is, there was Stax version of My Sweet Lord, and that's what we modeled ours on. Jimmy [Lee Carter] from the Blind Boys Of Alabama came in and sang it with us. I specifically chose that song to do - it's one of my favorites."

You only play on a couple of songs. Why is that?

"Because it's not my record. Besides, people already know what I play like. Well, maybe they don't, but you know what I mean - I wanted to introduce the masses to these guys. I'm a different musical personality than them, so it would have defeated the whole project if I was on everything. They had to stand on their own, without me."

The Slide Brothers use so many different stringings and tunings on their instruments. Did that present any challenges in the studio as far as wading through the various frequencies?

"It's a lot of different tunings, sure. When we were in the church, you had the evolution from lap steels to pedal steels, and everybody tuned their instruments according to how they wanted to play. Chuck Campbell was really the first guy to tune his pedal steel to try to get the country sound. He's more the professor of the tunings. He studied the theory behind it all.

"Sometimes we had to make sure nobody was on top of the other guy from a sound perspective. On Don't Keep Me Wonderin', there's Chuck playing a pedal steel and Derrick is playing a lap steel. If you look at Praise You, you've got dobro, 12-string pedal steel, six-string lap steel, E-Bow and all that kind of stuff. Eddie Kramer kept it all together; he made sure the sounds weren't colliding in a bad way."

What did you learn from this record-making experience? Did working with The Slide Brothers in the studio cause you to step up your game a little?

"It did. It's kind of one of things that I've been on for the past three or four years, of wanting to get back into my creativity. Any time you're with people that you admire, it builds you. I've been pretty fortunate to have had conversations with people like Carlos Santana and Eric Clapton and T Bone Burnett and all these guys. They give you a lot to think about.

"About the album, it was cool to be able to sit back and get creative with these guys, to put a stamp on what we really do as pedal steel and lap steel players. That was the fun part, but sure, I did have to come back with some ass-kicking guitar stuff, 'cause these guys are rocking!" [Laughs]

Do you feel as though the pedal steel is something of a misunderstood instrument to many people?

"Only to other people. In our church, the guitar players were the rhythm players; we always played the lead. For 100 years, we were the lead instrument. A lot of times, if I'm sitting in with other bands - like I just came from LA, where I did this all-star project with Ringo, Joe Walsh, Keb Mo and Mick Jagger and everybody - I get in there and I feel like I'm the lead guy. I'm not trying to jack myself up, but I'm just trying to come up with the best leads that I can. That's how I came up. It's like, 'OK, when it's my turn, you'd better crank it up, 'cause I'm gone!" [Laughs]

Back in 2010, you were named one of the 100 greatest guitarists of all time by Rolling Stone magazine. Did that blow your mind?

"At the time, not really. But then it hit me, like, 'Oh, shit, people want me to play some really good guitar now.' [Laughs] It's great in that way, because people remind you about it, and it makes you want to get better. You have to keep the enthusiasm and the desire to play, like when I first heard Stevie Ray Vaugh. When I heard Stevie, I was like, 'I want to play like that on the pedal steel.' So if people want to call me great or one of the greatest, hey, it just makes me try harder."