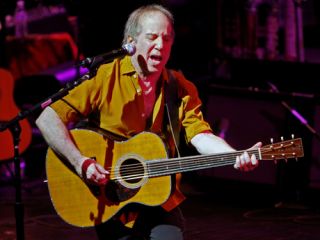 There goes Rhymin' Simon...coming up with a holiday classic. © Brian Hineline /Retna Ltd./Corbis

Leave it to a master songwriter like Paul Simon to conjure up a holiday anthem that can summon good cheer but raise social awareness at the same time. Such is the magic of his new composition, Getting Ready For Christmas Day.

Working with his longtime producer Phil Ramone, Simon eschews religious references but lays out a narrative that practically anybody can relate to during this time of year - or any other, for that matter.

The musical bed of the song, driven by an enthusiastically strummed acoustic guitar, hand claps and foot stomps (think Give Peace A Chance for a quick reference), harkens back to the singer-songwriter's South African-based Graceland period. But despite the bouncy, campfire vibe, there's a serious undercurrent, as evidenced in the the opening lyrics:

"So early in November to the last week of December/ I got money matters weighing me down/ Well the music may be merry but it's only temporary/ I know Santa Claus is comin' to town/ In the days I work my day job and in the nights I work my night/ But it all comes down to working man's pay/ Getting ready/ I'm getting ready/ Ready for Christmas Day."

And he's just getting warmed up. Amidst a deceptive, Marvin Gaye-like party atmosphere (which features a 1941 sample of the gospel singer and preacher, the Rev. JM Gates), Simon sings, "I got a nephew in Iraq, it's his third time back / But it's ending up the way it began / With the luck of a beginner / He'll be eating turkey dinner / On some mountaintop in Pakistan."

Most artists who attempt Christmas songs pile on the cliches like so many chestnuts roasting on an open fire, but Paul Simon has created a unique and stirring modern-day classic, one which is devoid of rehashed treacle. Like John Lennon's Happy Xmas (War Is Over), it captures the Yuletide spirit but gives you something to ponder as you open your presents and raise your glass.

The only strange thing (sort of) is that the song will be included on Simon's forthcoming So Beautiful Or So What, which is due out in...May. Oh well, a great track is a great track, no matter what time of year it may be.